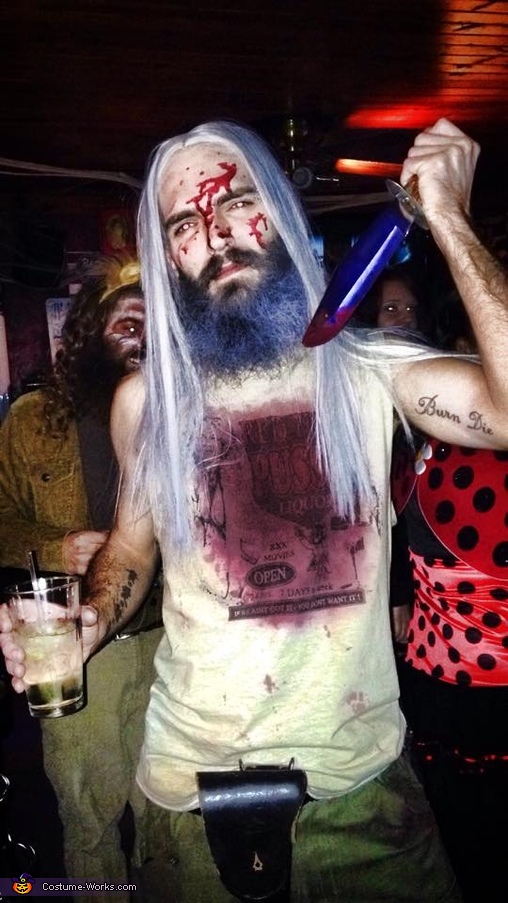 Otis B. Driftwood from The Devil's Rejects

A word from Dave, the 'Otis B. Driftwood' costume creator:

I am dressed as the character Otis B. Driftwood from Rob Zombie's movie "The Devil's Rejects".

The wig I made myself (I'm really a bald dude with a beard). I started by layering liquid latex on a sealed polystyrene head to create a bald cap to attach the hair to. I purchased 4 similar shades of Kanekalon hair from Doctored Locks. The use of 4 different shades really made the hair look more realistic. The hair was cut into 24" long pieces, the tips cut even and placed in long rows on parchment paper. I put just enough liquid along the tips of all the strands of hair to hold them together in a long strip. I would then take those strips and, starting from about ear level, place them on the freshly made latex cap. The cap wasn't powdered, so the latex on the strips of hair would adhere to the bald cap like glue, and then could be lightly touched up with more latex to blend the strip in with the cap. When the wig was done, I sprayed the tips with gray hair color to make them look dirtier. To get the botto! m on the wig greasy looking and make the hair clump together, I rub my Beard Balm on the tips of the hair and formed the clumpy strands. It worked great!
When the wig was finally complete, it was removed from the polystyrene head, and the latex was trimmed back as close to the wigs hairline as I could safely get it. I placed it on my head, lined it up, and blended the seam line with flesh tone liquid latex. It was noticeable until I powdered it, then it was an exact match to my skin tone!

The blood on my face is homemade edible blood. Corn syrup, a few drops of red food coloring, 1 drop of blue, a sprinkle of some cocoa powder, and then corn starch to thicken it. I make it to a consistency to it will drip somewhat naturally for about an hour or 2, then it dries firm. In one of the photos you can see a drop hanging from the tip of my nose ... that stayed there for hours before falling off.

The shirt I'm wearing I had to make myself. The shirt Otis wears in the movie isn't one you can purchase anywhere. I replicated the design in Photoshop, then sent it to UberPrints to have it screen printed on a light gray Hanes shirt. After receiving the custom printed shirt, I removed the sleeves, and began the weathering process. I sanded the shirt with 100 grit sand paper for an hour to wear it thin and make it look extremely worn. I then mixed up some tea in a spray bottle and began layering it on the shirt, focusing mainly on the neck and arm pit area to give it that gross sweat stained look. After that I used watered down acrylic paint to make the blood stain in the middle of the shirt. I started with a heavily watered red/brown layer, then did 2 thicker layers closer to the center with more red to make it like a realistic blood stain from wiping your bloody hands on your shirt. When the blood layer dried, I put some watered down black acrylic in a spray bottle and wen! t over areas of the shirt to dirty them more.

The pants received the same weathering treatment as the shirt did. This character is a dirty, grimy person. So wearing new clothes would have totally ruined the look ... everything I bought new I attacked until it looked a decade old and never cleaned. :)