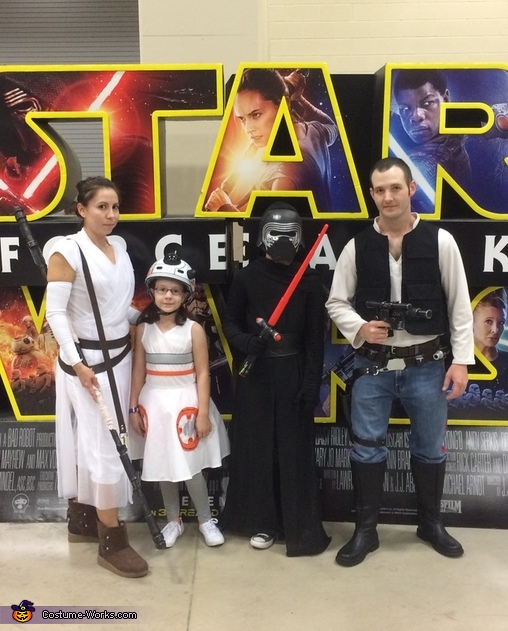 A word from Stephanie, the 'Star Wars Family' costume creator:

This year my family dressed up as characters from the latest Star Wars movie The Force Awakens. My husband was Han Solo, my daughter was BB-8, my son was Kylo Ren, and I was Rey. Almost all pieces featured in the pictures were homemade with the exception of Han Solo's blue pants and knee-high boots, and Kylo Ren's black plants, mask, and lightsaber.

Using a sewing machine, I made the entirety of Rey's costume with mesh, jersey knit, linen, and brown vinyl fabric; Han Solo's vest and shirt with denim and a poly-cotton blend; the BB-8 dress from cotton and felt; and Kylo Ren's robes and hood from various knits.

I used various sewing pattens to help create the general shape of the costumes. Some required the use of ingenuity to figure out, such as the Han Solo vest for which a pattern doesn't exist and I had to play with the pocket sizes and shapes using image references; and the Kylo Ren costume which only has a pattern in the men's sizes.

I also hand-dyed the Han Solo shirt from a bright white to a light khaki color using dark roast coffee. (I tried the same with the Rey costume but couldn't get the colors to match so I ended up bleaching it all out.)

My husband and I tag-teamed all the accessories which included Rey's staff weapon and boots, BB-8's helmet, and Han Solo's accessory belt and blaster.

The BB-8 headpiece was a black bicycle helmet we painted white, detailed in acrylic paints, and added ornaments and wire/glowstick for the lenses and antennas.

The Han Solo belts were made from store-bought brown leather belts as a starter. I cut/sewed pockets and the holster using brown leather fabric and attached them to the belts using various metal rivets, clips, hand stitches, and glue. I added accessories such as the CO2 canister painted green and some little plastic boxes painted silver.

Rey's boots were cheap light brown 'Ugg' boots I found at Payless. I covered them in chocolate brown wooly felt and added spare brown leather pieces to create the riveted loops for the laces which was a long, thin strip of brown leather.

For the finishing touches, I used Black permanent marker on bright red ribbon to create the stripes on Han Solo's pants, which were hand sewn on since I counted use a sewing machine. My hair was also styled in Rey's usual triple bun look featured in the movie using 4 hairties and 15 bobby pins.