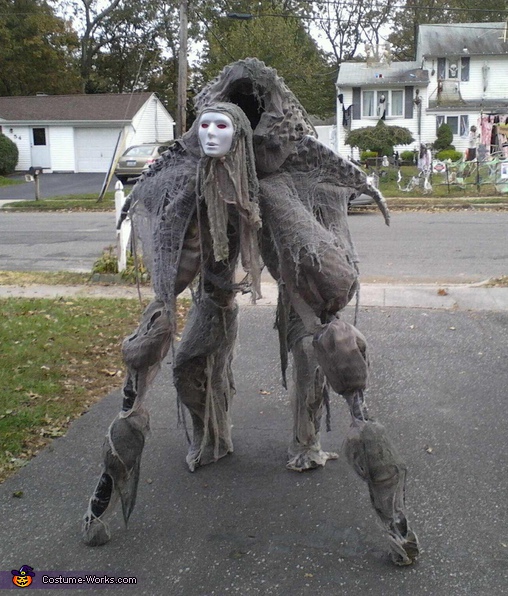 "what nightmares are made of"

A word from Eric, the 'Soul Walker' costume creator:

I have dreamed about becoming a creature like this since I saw "The Dark crystal"( landstriders scene) when I was a child. When I was an adult I went to see "circ de soleil" while watching the blank face crutch walkers and it hit me why don’t I combine them both. This creature I refer to as "what nightmares are made of" is 7 feet tall and primarily made of recycled foam from electronic boxes. An Old Foam Eggcrate Mattress, duct tape (that has been spray painted black) coffee dyed cheese cloth and ripped up dollar store spooky cloth. I used old crutches, in which I modified to make taller since they only go to 6.6ft. The most expensive thing was the dry wall stilts that I bought, which is cheaper than making stilts from wood. The pictures do not do it justice, watching the video of me walking around scaring everyone on Halloween does. I will be making a how to video shortly but for the mean time click on the website link to view some of the creature in action video/photo. Happy Halloween!!!