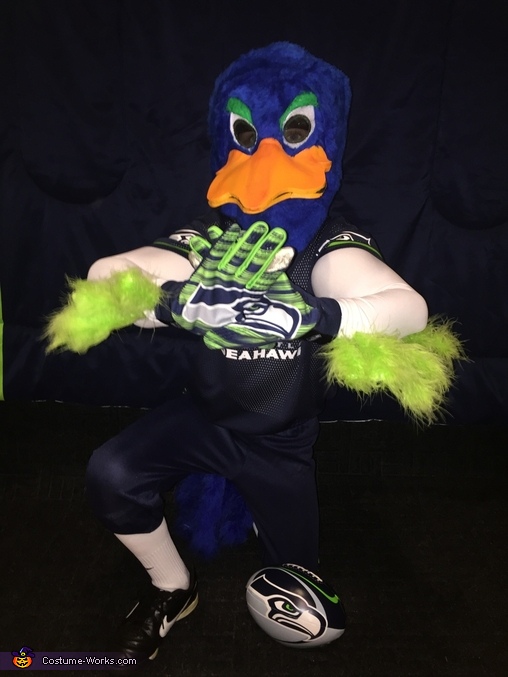 My 9 year old son Corey is wearing this costume. He told me he wanted to be the Seattle Seahawks 2014 Super Bowl Champions mascot, Blitz. It took some brainstorming to figure out how I would create this costume for him. First I found an image of Blitz to inspire me (which I included in the photos). For the mask I found a full face hard masquerade mask at a Halloween store to use as my base. For the eyes I painted and cut them out of a splatter guard (from the kitchen), then taped the edges off. The challenging part was the beak, I drew the shape I wanted for the upper and lower portions of the beak onto paper then traced it onto craft foam, then cut it out with a xacto knife. Next I took the beak shaped craft foam and dipped it into boiling hot water and bent and shaped the curves into it, after shaping it, I dipped it into cold water to set the shape, this took a few tries to get the exact shapes I wanted for the upper and the bottom portion, but once I got it, I let it dry, it then it hardens and keeps the shape. Once they were completely dry, I hot-glued the beak and the eyes to the mask. Then I painted the beak with acrylics, this took 3 or 4 coats before I got the look I wanted. For the headpiece, I had a larger piece of foam that I shaped and glued into a bonnet shape. I used blue furry fabric that I purchased at the fabric store and strategically hot-glued it onto the face first. I hot glued the foam bonnet to the mask and continued gluing the fur onto the headpiece. Lastly, I painted the eyebrows green.
For the tail and the arm feathers, I used boas that I also purchased at the fabric store. The tail is twisted and gathered to form its shape and I just safety pinned it onto the football pants. The arm feathers were cut from the boa and attached to the sleeves with hot-glue, I added some hairspray to the tail and the arms to lessen feather loss, but I also liked the look it gave.
For the muscles I used a pair of knee high pantyhose. Put some stuffing in them, tied a knot, and then put even more stuffing in them to create large biceps. My son simply hangs onto these while putting his arms into the form fitting shirt and Wa-La, he's got muscles!
I ironed on the zero and Blitz to the back of the jersey to finish it off.
The craft supplies probably came to around $50.
He will be able to wear this costume on game days, so it serves more than just Halloween. I probably spent over 40 hours on this, but the final product and my sons excitement made it all worth it!
Go Hawks!