Queen of the Dark Sea
by Chasity 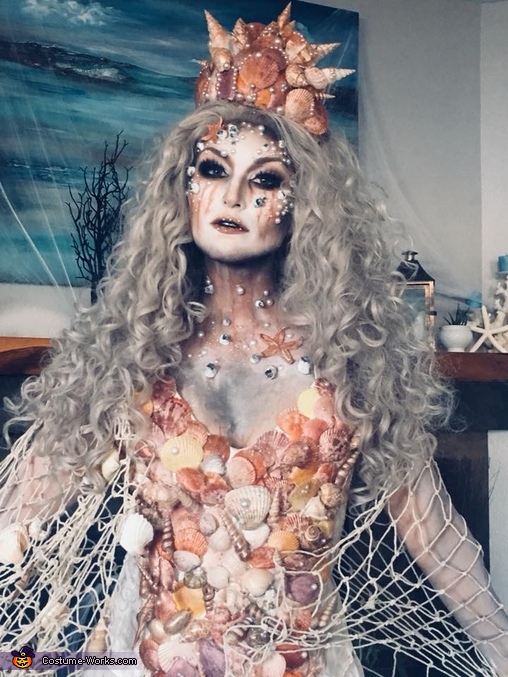 A word from Liz, the 'Scary Sea Queen' costume creator:

This is me, and I made the costume for a birthday party I had. I follow a lot of makeup people on instagram and one artist in particular had an awesome makeup tutorial like this, which was so inspiring. Her name is kimberly margarita. I was obsessed with the concept of a scary sea queen. I love creepy costumes. We also live on the water and I thought it was fitting, because our party was at our beach condo. I wanted to just be covered in shells so I bought a cheap corset on Amazon and began covering it in shells. I found all the shells in bulk online. I used Gorilla glue hot glue to stick all the shells on. I also covered it in some pearls and finished with a a light dusting of copper spray paint. I just kept gluing shells until I liked how it looked. I found a fisherman's net on amazon and glued even more shells to it, like they were stuck in the net. I wrapped it around me like I had been trapped in it. The flowy maxi skirt is a cheap thing off amazon that I dirtied up with copper spray paint and makeup. I bought a cheap tiara as well to give me a shape for a crown and covered it in shells. I later pulled the tiara from the back and connected it to a thicker copper headband to secure it to my head. That's about it! Literally this entire costume is shells and glue. I glued the pearls to my face with eyelash glue and fashioned the barnacles out of molding clay. I got that idea from the makeup artist. It was easiest for me to google pictures of barnacles and try and recreate what I saw in those photos.