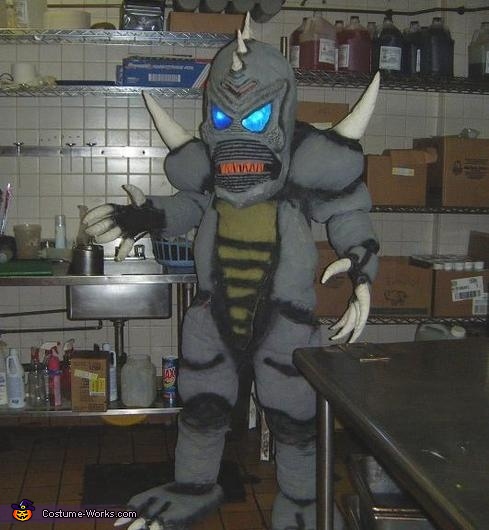 A word from Michael, the 'Rokzilla' costume creator:

This is ROKZILLA!!ROKZILLA is constructed with chicken wire, paper mache,a sweat suit, flannel sheets, pillow stuffing, gloves, slippers, glue, paint, small electric motor & pre-wired lights. ROKZILLA's head is made mostly of paper mache on a chicken wire frame. The eyes light-up & change colors & there's a small battery powered motor that moves the mouth. The body consists of flannel sheets sewed onto the sweat suit and filled with pillow stuffing to make the "muscles". The same method was used to make the hands and feet. It took apx. 4 months to make the costume. It's 99% made of materials I had around the house. The items I bought were pre-wired lights (for the eyes), glue & paint. Total cost was about $30! I made ROKZILLA as a cross between The Creature From The Black Lagoon & Godzilla! I've always wanted to make my own full body monster suit and ROKZILLA is my 2nd effort. ROKZILLA has made guest appearances at my Rock Band's gigs and he has his own following, along with the neighborhood kids looking for him every Halloween!