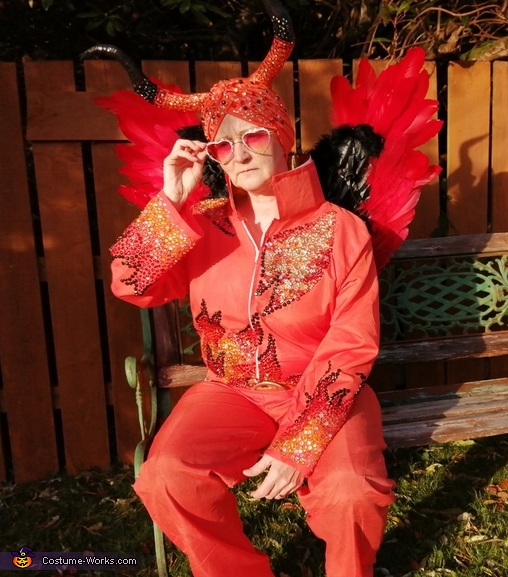 A word from Niamh, the 'Rocketman' costume creator:

I received Elton John`s autobiography as a gift at Christmas, read it twice as it was so good, then watched the movie Rocketman just as the Coronavirus pandemic began, in fact I watched it 3 times and so coveted the orange costume he wears in the opening scenes.
I began by recycling a homemade Maleficent horned headdress and wings from last year. Used orange duct tape to cover the black horns and attached many coloured gems with a glue gun, and added red feathers to black wings and duct taped an old belt with orange and added gems to it
I used an orange prison jump suit (not a real one might I add!!) and added around 4000 stick on gems in black, red, orange, yellow and silver using fabric glue onto a flame pattern I drew on with pencil. This was time consuming, I estimate around 15 hours - but hugely theraputic, listening to music while sipping a nice glass of merlot, I actually enjoyed that part as I had given myself lots of time to do it
Finally a pair of rose tinted heart-shaped glasses were bedazzled with tiny stick on silver gems
Total cost around 50 euro including the jumpsuit, duct tape, gems, glasses, glue sticks and fabric glue