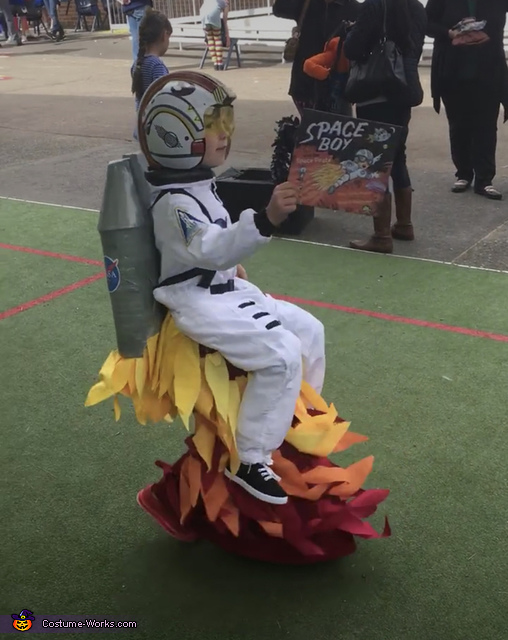 A word from Katherine, the 'Rocket Boy' costume creator:

This is a costume we used a few years ago in my son’s school book character parade.

I made the rocket pack by attaching two tins of baby formula end to end with duct tape to make a long Cylinder then doing the same again for the second one and then wrapping them both in grey duct tape and attaching them both side by side. I made a point at the top of each using cardboard. I printed and stuck NASA pictures on the sides and glued pieces of red, orange and yellow material scraps to the bottom to look like flames. Then I made straps to go over my sons shoulders using black ribbon so that it fit like a back pack.

I unpicked the back seam of a spacesuit that we already owned (from an online costume shop) so that my son was able to put his legs through the hole and have the legs of the suit dangle in front of him. Then I made some fake legs using some pvc piping and bend joints from the hardware store. I glued them together using pvc pipe glue in the shape of two bent legs and attached those two legs to a middle pipe that was long enough to allow my son to stand between the legs. I pulled stockings over the pipes and filled those with newspaper then secured them to the pipe with duct tape. Then I put them into the legs of the suit. I put black socks over the feet of the stockings and then lightWeight shoes on them too.

I purchased a stretchy red skirt from the thrift store and attached hundreds of pieces of red, orange and yellow material to it to look like flames. I sewed a small pillow into the butt area of the skirt (on the inside) which forced the backpack out and made the falling flames look like they were going down and not sideways. My son stepped into the costume, ensuring the legs were in place, then zipped it up at the front. He then slipped into the red skirt and a pair of crocs that we’d painted red and he was ready to go.