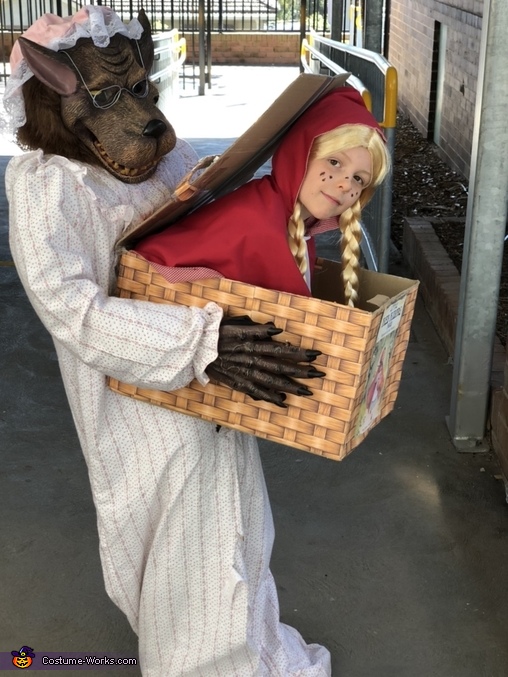 This is my 9 year old son wearing his Little Red Riding Hood and the Big Bad Wolf costume. It was originally made for the school book character parade (he won!) and then re-used for Halloween as well. I got the idea from some similar horror costumes online.

Firstly I purchased a rubber wolfs head, hairy wolf arms and feet from an online costume store. I filled the arms with newspaper to give them shape and stuffed newspaper into a stocking, making a ball shape, then sealed it with tape and shoved it into the head to give it shape. I printed yellow wolf eyes and put those inside the empty eye sockets of the mask and made glasses from some wire and a nightcap from material I had laying around.

I made a rectangular frame from wire which was approximately the same width and length as my sons torso and attached a coat hanger across the top using duct tape and plastic cable ties. Then I attached the head to the top of the coat hanger by straightening the bent hook of the hanger and shoving it up into the head and taping around the wolf’s neck with duct tape to hold it in place.

I then purchased a stretchy black turtle neck from a thrift store and put that over the wolf’s head and coathanger and sealed it around the neck and at the bottom with tape. I stuffed it full of newspaper via the arms then shoved the arms of the shirt inside the hairy wolf arms and sealed them on with tape.

Next I got a box and cut the top flaps off and taped them together to make a hinged lid for the box and re-attached it at one end so that it opened and closed like a picnic basket. Then I taped the bottom of the box up and I cut a hole big enough for my son to step through (which was positioned at the bottom of the box towards the end that has the hinge of the lid) and also ran the hole a tiny bit up one side of the box so that The wolf ‘body’ was able to blend a little better with the box. I printed off a basket pattern and stuck it to the box to make it look like a picnic basket. Then I attached the end of the box to the wire frame using tape and plastic cable ties which I ran through two holes I’d made in the end of the box (You’ll need to cut holes in the turtleneck to attach the box to the wire frame). Then I purchased an old night dress from a thrift store and cut it down the front and attached buttons to the bottom at the front so that the front could be done up again once my son had stepped into it, effectively hiding his legs. I put the nightdress onto the wolf’s form then had my son dress his top half as red riding hood (wig from costume store and red hood was handmade with spare material) and step into the box. I put the wolf’s feet onto his and buttoned up the front of the night dress and finally I attached the wolf’s hands to the box using cable ties. My son used the inside of those ties as handles to hold up the box to stop it drooping. And he was ready to go!

Note that the box may slip down your waist if the hole is too big. To counteract that we had my son wear a belt that was big enough that the box sat on it and didn’t slide.