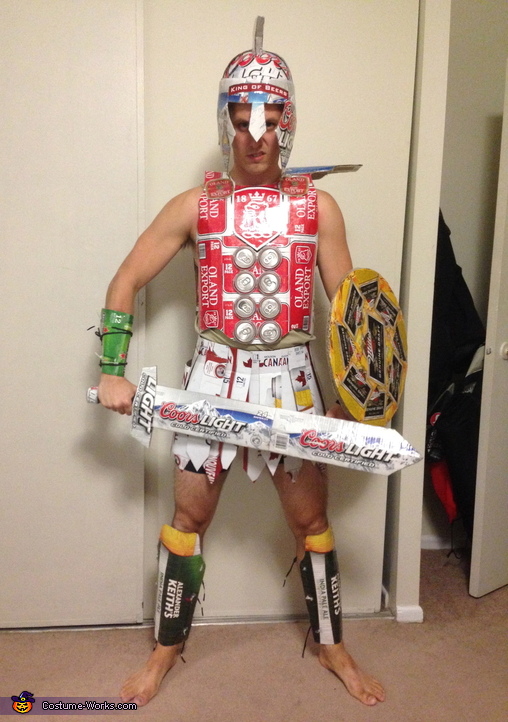 A word from Luke, the 'Recyclus Maximus' costume creator:

My names Luke Adamson and this year I decided I wanted to go as a gladiator. But not just any gladiator... I created a Beer Gladiator aka Recyclus Maximus entirely from cardboard and a variety of different beer cases.

The idea actually came from someone else's attempt that I saw at a bar last year on Halloween... needless to say I saw a lot of potential with the idea and ran with it this year.

The creation of it was actually quite simple and obviously very inexpensive... as long as you don't have to buy all the beer! I'll explain how it was made based on the order of the pieces I created. My supplies basically consisted of the following:

Sword & Shield: The sword is actually a portion of the hockey stick in which I simply molded the beer cases around it. The shield involved cutting out a few circular pieces of the cardboard box and covering it in beer cases. I glued the two sweat wrist guards to the back so I could wear it on my forearm.

Skirt: Very easy... simply bought a cheap belt and glued/taped strips of beer cases which I cut and pointed on to it. I also added a piece to the skirt which could hold my sword.

Breastplate & Shoulder Pads (added a 2nd later, only 1 in photo): This piece took the most time but wasn't as hard as I expected. I basically cut out front and back pieces as well as shoulder pieces from the cardboard box. I then began gluing/taping beer cases to it. I also gave my breastplate an 8-pack by cutting some cans and gluing them on. The sides use velcro stripes so I could have it fit firmly and take it off/put it on with ease. One thing to note is that I crushed up the thick cardboard so it was easier to curve.

Helmet: I bought a $6 plastic army helmet and basically just played around with gluing pieces of beer cases to make it work.

Shin Pads & Forearm Piece: Also extremely easy. I just cut out the shapes I wanted and fed string through it and tied them on.