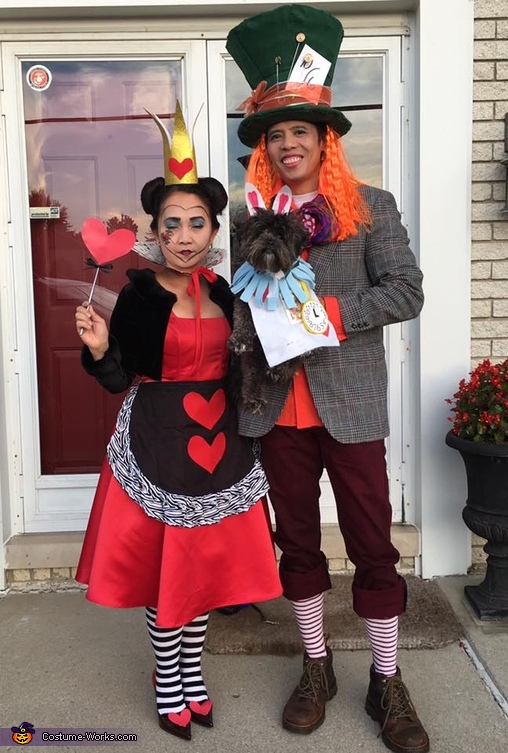 A word from Ethel, the 'Queen of Hearts, Mad Hatter and White Rabbit' costume creator:

The costume is inspired by the movie alice in wonderland. The cost of everybody's costume is less than $15. I utilized of what we have at home and bought some stuff from thrift store and dollar store for the accessories. For queen of hearts, I used an old red dress, black and white apron from target for a dollar then attached cut out hearts from felt which cost 35 cents per sheet, used only one. for the stand up collar, it's made of old playing cards that my husband had (lost some pieces)so it was ok to use and attached cards with a stapler to a collar-formed cardboard from a shoe box. and attached red ribbon to tie ($1/roll).for the crown , its made from a gold glitter sheet, found where the felt were. Attached a heart shaped felt (left over). Then I wore striped black and white striped socks and red shoes with card stock with heart shaped cut-out attached. and to complete the outfit made a heart wand from a choptick and attached cut out heart.
For Mad Hatter. Bought $1 coat from salvation army when they have sale to buy 5$ for 5. Had an old polka dot scarf to use. He used his old maroon pants with an old striped socks. and doc martens shoes. WOre an old orange inner shirt. Foe the hat, I made it from a card board which I found the tutorial online and covered it with felt paper (hunter green) and found an old orange ribbon to complement. Taken old buttons from an old coat and attached to a wire metal to put on the hat to accessorize and then added the cardboard with 10/6. Bought two pieces of orange hair from the dollar store and attached to the green hat. I did not buy a wig because it was expensive. I bought the cheaper one at the dollar store instead and it turned out nice. Just used hot glue to attach to the hat.
For the White rabbit (for our doggy). Evertything is made of felt (white, red, yellow sky blue) made a clock made of cardboard and attached the white shirt and put some cut out hearts.
I hope you like our costume. Make up done by me.