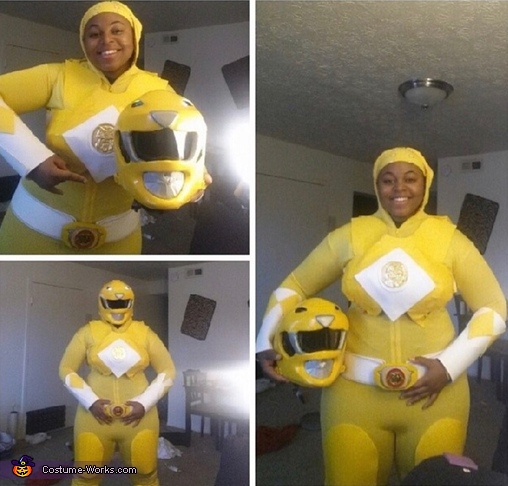 Where do I start?! My helmet was made using whats called a Pepakura file. It's a template to make a 3D model of your subject. After piecing together the 3D paper model, I then used Fiberglass resin to harden the paper so I could then use Bondo to create a smoother and sturdier surface. Many tools such as dremels, orbital sander, and screwdrivers were used to put the helmet together. The movie Mighty Morphin Power Rangers, included an effect in the Yellow Power Ranger's helmet and so I wanted to incorporate that into mine. I learned after many YouTube videos how to wire some LED lights into the eyes of the saber-tooth tiger helmet while also creating an invisible switch to turn them on and off. I spray painted the helmet and added the tinted visor once complete. I purchased a yellow skin suit to form the basic part of the costume. The chest armor and leg armor was made from Craft Foam. A little bit of heat from my heat gun went into forming and curving the foam to work with my body. Craft foam was also use to make my gauntlets and I spray painted some garden gloves white. The medallion in the center of my chest plate and the yellow ranger belt morpher were bought from a prop collector and added to my piece. This costume took me one month to complete and again i'm proud of what I accomplished and learned! I serious learned so much and didn't cut off any fingers!!!