Marvin the Martian and Rosie from the Jetsons
by Lynzy

Marvin the Martian
by Stephanie

Marvin the Martian
by Karina 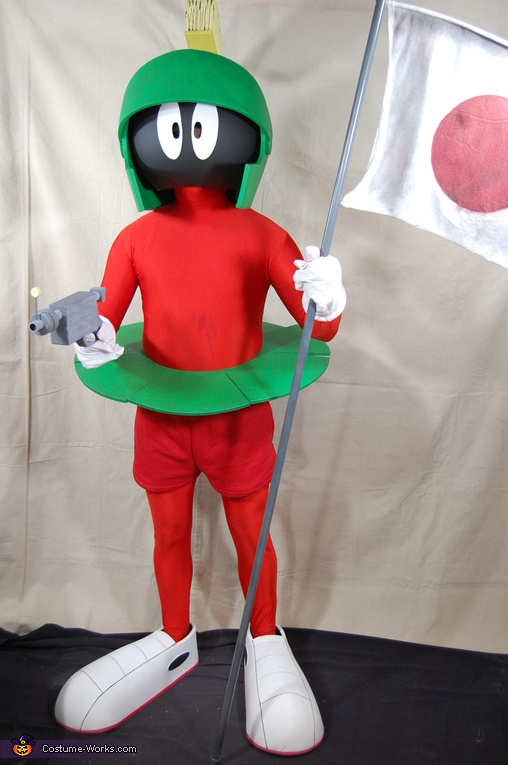 A word from Bryan, the 'Marvin the Martian' costume creator:

I gravitate towards full body costumes because it's fun to be immersed in the identity and personality of a character. For a short time every year, I get to use my imagination and play dress up without it being totally weird.

In regard to fabrication, I like to take on costumes which force me to learn a new technique and/or skill set. This year, that took the form of Foamsmithing - using EVA foam floor mats. Making custom templates, cutting foam, shaping and gluing foam together with contact cement, sanding foam, and painting foam -- all new territory.

Body: A face open lycra bodysuit (purchased) with the addition of cut off/resewn sweatpants to maintain my decency.

Head: A 14” acrylic globe usually found atop decorative lamp posts. After enlarging the bottom hole to fit over my head, it was prepped with plastic primer and then spray painted flat black. The inside was padded out with foam until a snug fit around my head was achieved. The eyes are cut from 1/8” craft foam, while the pupils are drilled out and actually used to see from within the head.

Helmet: The templates are an existing Evil Ted pattern, which I enlarged to 200% then modified to include additional material for the cheek flairs. The templates are pinned to the foam, traced, and cut out with a sharp razor. Any initial shaping/curving can be achieved by warming up the foam with a heat gun and bending the form by hand. All mating edges are coated with contact cement, allowed to dry for 5-10 mins and then pressed together for a clean and insanely strong bond. Once glued together, I laid out and cut the cheek flairs, as well as adding a flair to the back of the helmet by notching/re-gluing the foam. The visor was laid out as a separate piece, which was cut and shaped to fit – no template.

Plume: Starting as ten layers of foam laminated into a block, the rough form of a deck brush was cut out using a bandsaw and then shaped using an oscillating belt sander. To create the appearance of bristles, I cut a few wedges out of the foam at the top edge and then used a sharp razor to score shallow lines on the top and all sides. Applying air from a heat gun will make all these cuts open just a bit. A rectangular piece of foam is glued to the bottom of the brush section to act as the wooden block and then a hole is drilled in the center to accept a section of ½” PVC. A T-nut was epoxied into the other end of the PVC pipe so that this entire plume assembly can be attached to the acrylic glove with a hex bolt. Not only does this make for a secure connection, but it’s removable, which means easier storage and shipping if necessary.

Skirt: The skirt was laid out by drawing a 17” and 28” diameter circle around the same center point onto contractor paper and then divided into seven segments of varied widths. The 28” circle was cut out, the 17” center removed, the remaining ring cut into the seven separate parts and used as templates to cut the parts from foam. The segments get glued to the top of a foam belt, which is a 2-ply lamination of 1 ½” wide strips of foam. A plastic, side-release clasp on nylon strapping is concealed within the inside layer of foam at the back of the skirt. This solution make the skirt quick and easy to put on and remove. I left a few inches of excess strapping so the fit can be tightened/loosened.

Shoes: The shoe template was created by building a temporary form using cardboard, scrap foam, hot glue, and packing tape. That form was covered with aluminum foil and a layer of duct tape, then separation/cut lines were then drawn onto the tape. After removing the foil/tape, it was cut into the three designated sections, flattened, and used as templates to cut two sets of parts from foam. The three foam sections were glued together to form the shoe tops and then glued to the soles. The foam shoes ended up being 20” long so to make them wearable, I used contact cement and glue inexpensive shoes inside the enormous shoes. This worked perfectly, but it’s still difficult to walk in 20” shoes.

Disintegration Pistol: EVA floor mat foam with ½” PVC for the barrel. I sketched and made a template for the grip and core of the pistol using a Nerf pistol for scale reference. The remaining parts were designed and fabricated on the fly using reference pictures. The foam rings were made my tracing a 2” fender washer and using a ¾” copper pipe, with the outside edge sharpened, to punch out the centers. The outside diameter was cut close to the line and then sanded to the line using an oscillating belt sander. The sight is just one of the punched centers glued to a short section of 1/8” steel rod.
Flag: A white T-shirt with a spray painted red disc (Mars = The Red Planet). The pole is ½” PVC with a 3” Styrofoam ball and two foam rings glued to the top. A length of PEX is hot glued to the top of the flag and inserted into a hole drilled in the ½” PVC in order to keep the flag open/visible.

Gloves: Also cut from a white T-shirt after being traced using a homemade 4 finger/Muppet template. They were poorly stitched together using a sewing machine. The material at the base of the glove is wrapped around a foam ring (5/8” caulk saver foam) and secured using hot glue because I wasn’t sure how do get that done with the sewing machine.

Prepping And Painting Foam: All of the foam components were sanded as necessary, gaps filled with Kwikseal caulking, heat sealed with a heat gun, base coated with Plasti Dip, and then acrylic latex finish colors were applied with a brush.

I won "Best Overall" at a Friend's annual Halloween party ($15 Dunkin's card - worth it).

On Oct. 31st I put up a light stand and stood outside in full costume to hand out candy. Most of the very young kids were too hesitant to approach, but a few offered “low fives.” Old kids, but more so adults, asked if they could take pictures with Marvin. The general consensus was that Marvin The Martian was an AWESOME costume.