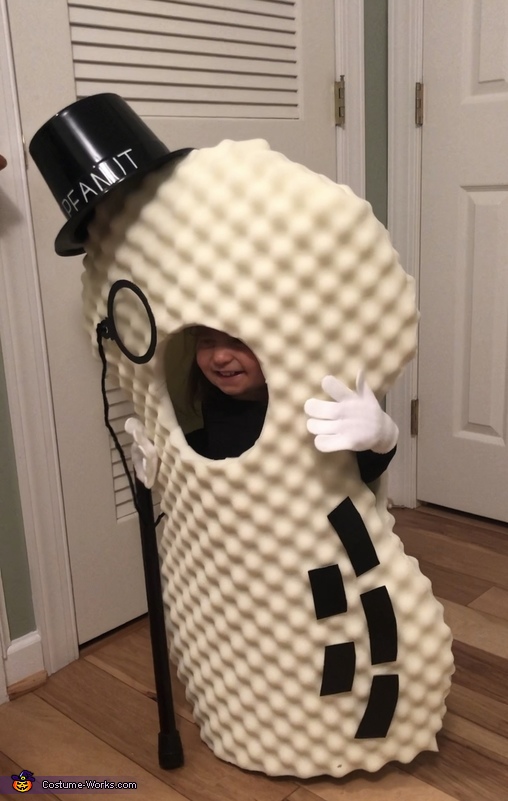 A word from Adrienne, the 'Lil’ Peanut' costume creator:

I made the costume for my Daughter who is 1.5 She’s our Lil Peanut. I used an egg crate foam mattress (Amazon and Walmart sell at decent prices). It took awhile for me to figure out best approach for this so that there was some room inside to fit a child’s body.
I had my kid lay on the back side of the foam to trace the body. Then I drew a peanut shape around it so that the arms would come out the slender part of the peanut.
Before cutting anything I folded the foam at the top of the peanut so that there was an extra couple of inches between the top of the peanut and the fold. This helps to give some 3D shape. Then I traced the other side of the fold with same peanut shape. Leave enough space for the body.
I will say that my peanut turned out a little too big for my daughter. Also make it so that the bottom of the nut hits the knee or higher. Because mine was too big, it almost went to the floor making it difficult to walk or see the cute socks and shoes.
Cut the foam on your traced lines except for the top part where you fold it over.
Once cut, fold in half and take the top corners where you didn’t cut and tuck them in to help create a round shape.
To secure everything I started to sew it together but that didn’t work out at all. The thread went through the foam and didn’t make a tight connection. Instead I bought Loctite spray glue that is for foam. This is key because other flies are not strong or eat at the foam. I even tried a hot glue gun and it didn’t hold well. It also melted the foam.
Spray your foam in sections. Start at the top and spray at the cut edge of the foam. Match the back side so that the edges meet. This also helps create a 3D effect. (Tip. Blow on the glue a little before securing so that it isn’t too wet). Press the edges together until it is secure. I used some office clips to secure into place as well.
Don’t glue the slender part because this is where the arms go. I also did not glue the bottom so that my child could get into the costume from the bottom.
Finish gluing the left and right bottom rounded part of the peanut.
When done take those folded in edges at the top and make sure everything looks rounded then spay in the crease and secure in place.
For the monocle and black accents at the bottom, I used black cardboard from a box I had and cut the shapes.
I used a clear plastic I had (you can even use Saran Wrap) for the inside of the monocle. I used black pipe cleaners to create the string of the monocle.
I bought a plastic top hat from party city and got a white pen (the kind you shake and press down on to get the ink flowing) to write Lil’ Peanut. I glued the hat on top of the peanut.
I cut a hole in the foam where the head would go.
For day of i put my child in black pants and black long sleeve top. White socks with frills. Black shoes and children’s white gloves that were oversized a bit to look like a character.
When ready I slipped her into the costume.
Oh. The best part was I bought a cheap wooden cane off the web and had a grandparent cut it down to the right height.
Good luck and happy peanut costume making!!!
Oh and I probably spent $60 in total.