The Book of Life La Muerte
by Jacie 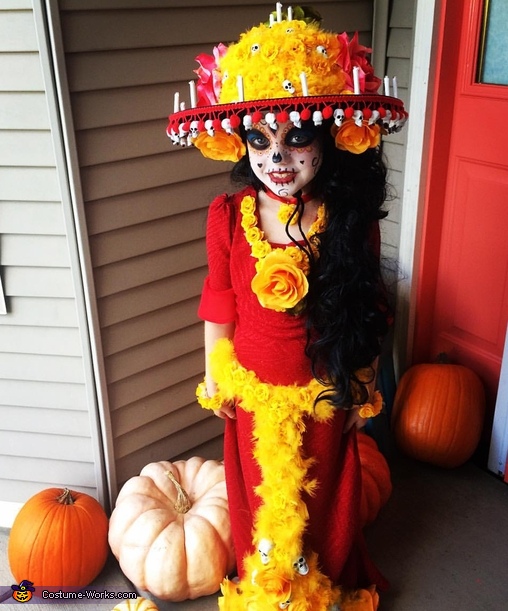 A word from Mande, the 'La Muerte' costume creator:

My daughter Ava decided she wanted to be her favorite character from the movie The Book of Life, Le Muerte. And I was all for that because that meant one less Queen Elsa on the streets! The daunting project began with a simple adult size red party dress, obviously too big for a 6 year old. I wish I had taken a picture of it before I started the alterations! It was a size 6, long sleeve, knee length (but not on her), open back, low cut dress. But the color was right and it was something I could work with.
I started by closing the open back with a zipper, the first zipper I've ever sewn! That made the dress fit around my daughter nicely. Next I needed to add a little "Poof" the top of the sleeve and I did that by just gathering the fabric and hand sewing it. I then cut the sleeve length just above her elbow and added a chiffon trim. With the left over fabric from the sleeves I added a section across the chest to change the neck line from the low cut. I still had enough sleeve fabric so I cut slits up both sides from the bottom of the dress and added a triangle to each so she could walk easier, and it gave the dress a little flare. Finally the sewing was done!
Now to the fun part! I attached a long yellow boa, with thread and some hot glue, around the waist and down the front of the dress. I use a boa for filler because the dress would have been too heavy if I had use all flower like the cartoon character has. Next I hot glued small yellow rose onto the boa and dress, randomly. I also glued the roses along the neck line at this time, adding one large rose in the center of the neck line. I then added larger roses at the base of the dress, also in the boa. After I was done gluing all the flowers on, I gave the boa a haircut so the concentration was the roses and not the feathers. For the next step, I prepped ahead by spray painting gray plastic skulls a bright white and added a little glitter. I glued the plastic skulls randomly among the roses and boa towards the bottom of the dress. The dress part was done, now on to the hat!
I started with a hat I found at a Halloween store. It was all black with red ball fringe, perfect! The first step was to add small skull beads between all the red balls on the fringe, which I found at a craft store but they were the wrong color so I also prepped these skulls by spray painting them white. I sewed them onto the hat with embroidery floss. Before I worked anymore on the hat itself I needed to create the candles to around the brim. To do this I bought some paper straws and cut them into 2" pieces. I could not find just white straws so I spray painted them all white. Next I took mini, battery operated, Christmas lights and inserted them into each straw piece just until the bulb came out the other end. When I got all the lights in the straw pieces, I then hot glued them along the brim of the hat so they would stand up straight. I left the last 5 light loose, unattached for a latter step. I also glued the battery pack on the very top of the hat. Next I covered the green light cord with red ribbon, gluing it in place over the top all the way around the hat.
After that was done I then took another yellow boa and glued it around the head section of the hat, all the way onto the top, covering the battery pack. Once the boa was on I gave it a haircut to take off some of the bulk and fluff. Next I randomly glued on small yellow roses in the boa. Then I took the extra lights/candles, that I left un-attached, and glued 3 of them on the very top of the hat and hid the other 2 inside the boa. I added two rose leaf clusters behind the candles on top. Then I attached two large pink roses on either side of the hat, and two large yellow rose under the hat, above the ears. I then glued on the small white skulls into the boa on the front side of the hat. It was almost done, but I felt it needed one last touch. I melted white candle wax down each straw so they looked like real candles.
The hat was done! Now just 2 more details. I made a choker necklace with a red ribbon and one of the small yellow rose attached to a chain so it dangled. And for the last detail I made two bracelets by gluing the small yellow rose onto elastic bands I tied to fit her wrists. Game Day! It took about 20 minutes to do her make up. And we did it several times for various Halloween parties throughout the week. Each time I started with white face paint but by Halloween I realized that her face is naturally vary white and that was an extra step we did not need to take. She had so many compliments and people stopped in their tracts to take a look at her costume. I'm so very happy with how it turned out and that I took the time to create something special and original for Ava! She was so happy!