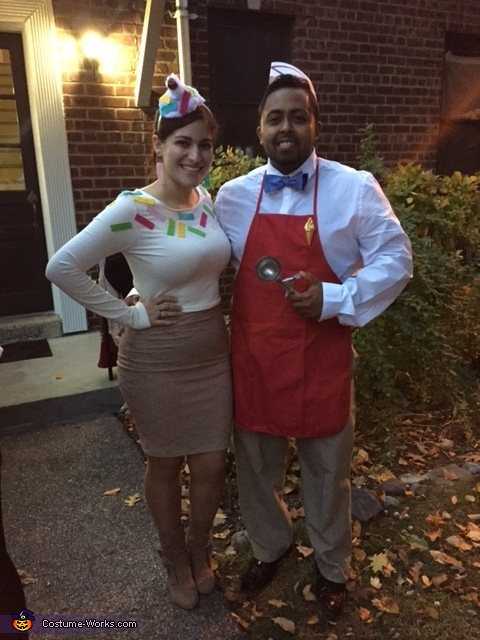 My boyfriend and I have been dating for 4 years, but we've never been able to spend Halloween together because we were in a long distance relationship. We recently closed the distance and I was so excited to spend Halloween with him. We decided it was definitely necessary for us to dress up as a couple. We wanted to be something original and we share a love for ice cream (we probably go on more ice cream dates then is healthy!!) so we came up with the idea to be an ice cream cone and the ice cream man. For the ice cream cone I got a cheap white shirt and tan skirt. I purchased different colored felt to make the sprinkles and I used a brown marker to draw lines on the skirt (to resemble the cone). To make the head piece I twirled a giant pipe cleaner in the shape of whipped cream and then attached felt sprinkles and a fake cherry on the top. I attached it a headband. My boyfriend wore a white button down, khakis, and a blue bow tie. He got the red apron from the craft store and attached a little ice cream cone magnet to it. He made the soda jerk hat with card stock, tissue paper, tape, and a red pen. He carried around an ice cream scooper to complete the look! We spent Halloween in NYC and our costumes were a big hit!