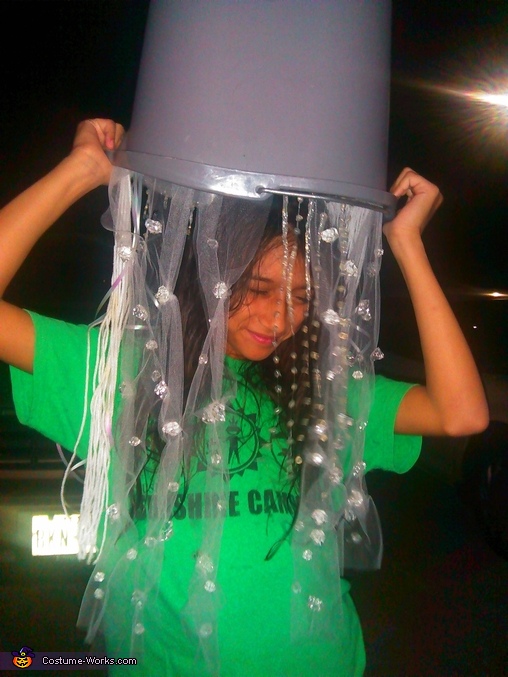 A word from Crystle, the 'Ice Bucket Challenge' costume creator:

This is my twelve year old daughter, Nevaeh. For the past several years I have relied on DIY Halloween costumes. Being a student and mother of three, there is hardly room in the budget for costumes that are only worn once a year. We brainstormed on popular topics. I even researched top ten lists of 2014 and got no where. We wanted something that 95% of the population knew about. The Ice bucket challenge was the best idea. Not only was it the leading topic, but it was a very good cause. Some of my family members did the challenge and a lot of my friends too. It was everywhere. We knew we had a winner. It was fairly easy to make after I figured out how I would create the water. We used a personal bucket, string, yarn, mesh, and beads. The beads were the only thing I had to purchase ($4.00). Everything held together with hot glue using a glue gun. I even placed extra material in the bucket to fit her head; so she didn't have to hold it all night. I had her hold it in the pic for effect. We both loved this costume and the response from everyone was priceless. I think the funniest response of the night though came from a senior citizen. She asked, "Why is that little girl wearing a bucket?". My sister-in-law responded, "She's the Ice Bucket Challenge." The lady replied, "People are putting buckets on their head?".