Wilson From Cast Away
by Sarabeth

Cat holding a Fishbowl
by Heather

Juno and Bleeker
by Regan

In Stephanie's words:
(Stephanie WAS, in fact, pregnant during this Halloween)

...here's how I became a pregnant nun!
I had a black dress that I wore a few weeks back to a social event for a local radio station that I wore over a white turtle neck that actually belonged to my mother. The gold cross necklace is also from my mother. :) 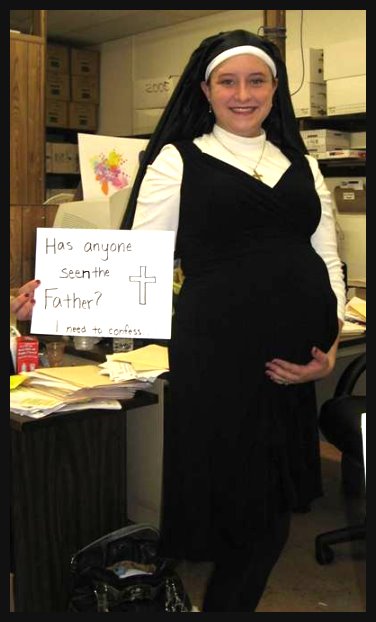 The head dress – now here's where I had to get creative!, it's actually a black skirt that I have and I wore it on my head. I put the thin white head band over the edge of it. and that's all! the sign is just sharpie on a white piece of card stock paper! :)

Thanks Stephanie!!
(and congrats on the newest delivery!) Ü

If you don't have the time or the inclination to MAKE a costume this year. If you've thought about it, but your heart, for whatever reason, JUST isn't in it...You can probably purchase a costume of the type you were planning to make...and maybe even for about the same as you might spend on the materials to MAKE a costume. On the other hand, you may look around and spot a Costume that changes your Costume plans completely Ü.