Marilyn and Joe
by Berdella 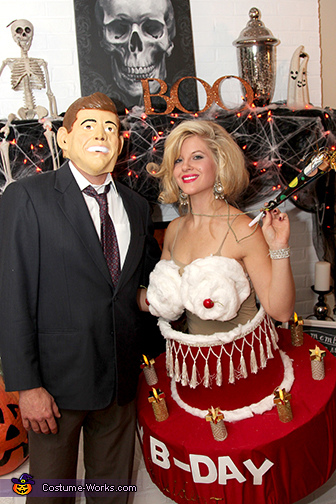 I decided to do a birthday theme this year since we were going to a party on Nov. 1st (My boyfriend's birthday). I always go all out for Halloween and this year his only wish was that I "please don't have a mustache". So when I asked myself, "what is semi-sexy and birthday related?" The only answer I could come up with was obviously popping out of a cake with a whip cream and cherry bikini. And to make it "coupley" why not throw a JKF mask on his head and style my hair like Marilyn Monroe.

The construction of the cake was comparable to that of what a crack-head would probably come up with. Imagine the look I got when I came home with a lamp shade, 2 hoola hoops and some poster board, and said we had to build a cake out of it. Not to mention when I tried on lamp shades at the goodwill to see if they fit.

For the bottom tier of the cake we used wire to hold 2 hoola hoops together then covered the outside in poster board and the top with cardboard using duct tape. Then that was all covered in red fabric ($2 at Goodwill). The candles were made out of PVC pipe, with cardboard glued to the bottom, wrapped in sticky gold paper (from JoAnn's). I got the battery operated flames from the Dollar Tree, Those had to be glued on right before the party started because the power switches were on the bottom. The whole contraption was tied to a belt in a pair of shorts so that it could come on and off easily. The top tier was a lamp shade ($2 at Goodwill) covered in fabric. It just went over my head and hung on my hips by itself so nothing was used to hold it on. It just sat on top of the bottom tier.

I thought about using white loofas for the whip cream bra until I notice the giant box of cotton rope at my mom's hair solon they use for perms. I took a whole bunch and glued it onto an old strapless bra. It was falling apart by the end of the night. It was kind of funny, though, because it looked like it was melting. The artificial cherries I got from Joann's.

We went to a family party and even though my dad was slightly disturbed, we won the contest unanimously! I didn't forget to serenade JFK with the famous "Happy Birthday Mr. President" before he blew out his candles. He may or may not have rolled his eyes and said we're going as sheet head ghosts next year.