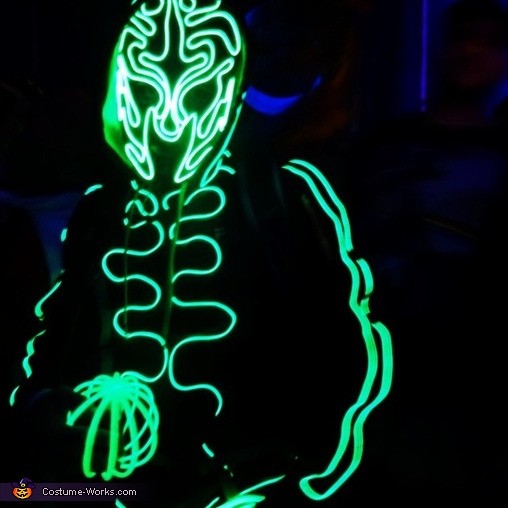 A word from Chris, the 'Green Man' costume creator:

The idea and construction of my costume came from my personality, skills, and passion for dance and music. Last year my best friend introduced me into electronic dance music (EDM), by bringing me to a music festival called Tomorrow World held in Atlanta, Georgia. In September of 2013, Tomorrow World brought together over Three Hundred of the worlds top DJ's, people from every single state in the United States, and over 40 Countries. During this amazing festival i had the opportunity to see so many creative people who express themselves through there costumes/clothing, music, and style of dance. This inspired me to return the following year with a costume that would make me stand out and express my individual personality and abilities. I also wanted to make something that would work well as a halloween costume so I would have more chances to wear it. At a store inTomorrow World I saw a sweat shirt that had one strand of light up wire up along the zipper and around the hood. I liked how it looked but thought so much more could be done with that wire. I knew i wanted to make a costume that was completely lit up with this wire.

First I took a white dressmaking pencil and sketched an outline of where I would want the wire to go on the jump suit. When I was happy with my sketch I followed the outline with the el wire and tacked it down using dressmaker needles about every half inch. I then stitched the wire on using a threading needle and 8 Lb fishing line. I ran a separate piece of wire for each leg and a separate strand of wire for the hoodie so I could disconnect the pants from the shirt. The three strands of wire that make up the jump suit are connected to a driver in the right pocket which controls the settings and sound sensitivity. The driver is powered by a 12V battery pack wired in the left pocket. The mask and Camelback follow the same process as the jumpsuit and run off of there own driver and power supply that are wired into one of the pockets of the camelback. The green balls I use as hand accents which are made by connecting 12 glow sticks together with a 12 slot connector and then glued together for reinforcement.

Pictures do not do this costume justice. All of the el wire that makes up my entire costume is programed to light up to the beat of the music. During pictures I set the costume to constantly stay on, but when i am dancing I adjust the sound sensitivity to match the music, and flash to the beat.
The green sphere’s I wear around my hands are not only used to accent my movements but I can also spin them creating different patterns in the air by consistently hitting them with the same movement.
This costume took me over 60 hours to design and assemble, and approx. $210 in materials