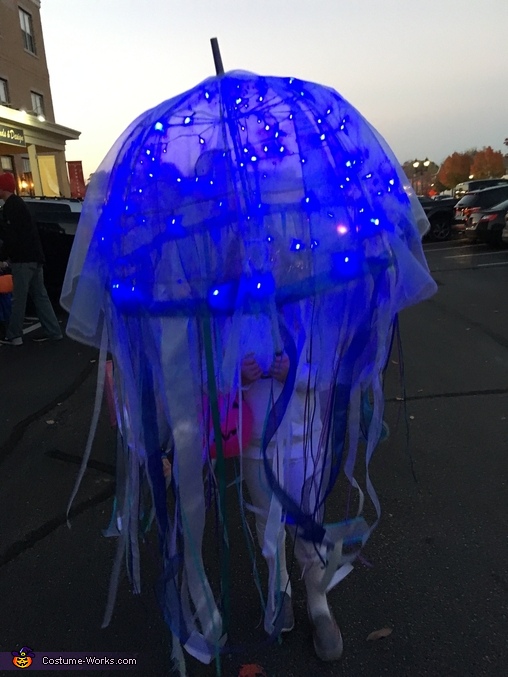 A word from Stephanie, the 'Glowing Jellyfish' costume creator:

8yr old Daughter Is wearing the costume and really wanted a glowing costumer that lite up somehow, so we decided to research things that glow, insects, toys, animals etc. and came up with this! First step is to buy blue lights battery operated packs (4), clear umbrella, and several spoils of different ribbon (15-20). Christmas decor is now in stores so there was so much to pick from! She wanted a shimmery blue, iridescent, sparkle blue so we were able to cut all ribbons to size and tape them on the ends of the umbrella all the way around the umbrella, the battery packs are taped inside against the umbrella handle at the base so it can be opened and closed easily. The lights thenselves were taped to the inside of the umbrella then. Everywhere we went trick or treating people asked to take pictures and stopped her to look at how it was made! Lots of people telling her it was the best costume homemade they had ever seen!!! She was so delighted and more importantly proud she thought of this and made it! Lots of hours of holding it in the air and taping pieces together!