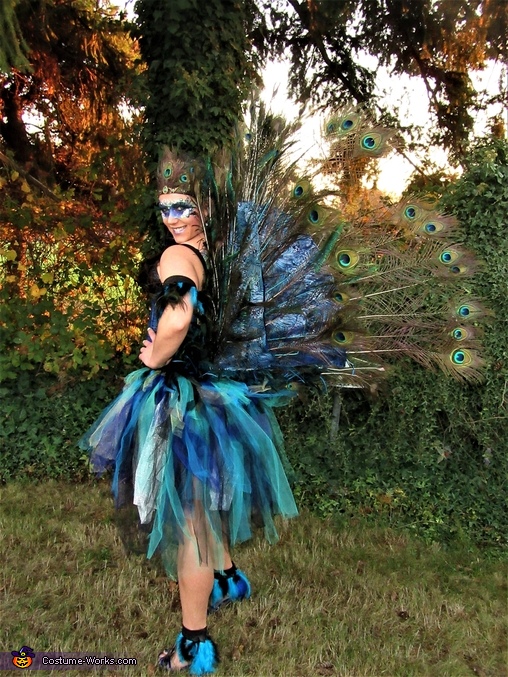 A word from Ashley, the 'Peacock' costume creator:

My name is Ashley and I am wearing and fully created this costume. I got the idea last year when I saw a peacock feather bra. I thought it would be fun to make a costume with a tail that could move and be fully functional. I bought the bra and then started drawing up ideas on how to make it work.
I researched and found a tutorial online.

I the followed the 13 step guide but added my own customization's to it to make it big enough to fit me instead of a six year old. The Supplies that the web page called for were Child size - 150 feathers eyes and spears & 200+ adult feathers. Of course for being 5'10" I had to use twice the amount of feathers. The harness was made of Heavy gauge wire, a Chicago screw, a Arizona Ice tea Bottle, 8 washers and screws, a 3" elastic band, and a wooden board. I used a piece of ply wood for the base and used 2 pieces of the Arizona tea jug to make the brackets for the tail as described in the tutorial. when it came to making the layers for the tail i followed the instructions on weaving the feathers and wire through the netting but added fabric over each layer of netting to hide it from the top with hot glue. I also added one more layer of fabric and more feathers to the very bottom layer to hide all of the netting. I wove 30lb fishing line through the tail to make the tail articulate on the holster and added beads to the end to hold on to.

To make the tutu I used about 10 spools of toll and 2 child size woven headbands sewed together and weaved the toll through each opening to get it to my desired shape and size.

For the corset i bought a black under bust corset and used it as a pattern to make a covering with my own fabric. I then sewed the covering to the corset added trim and new lacing to the back.
The crown was made from two pieces of fabric sewn together with lace to tie it in the back and I covered it in feathers and gems.
Other accessories that were bought were the arm bands and ankle bands that go over the tops of the shoes.

To say the total cost of my costume is a good guess of around $500-$700 I spaced out purchases over a span of a year and I keep changing and adding to it and the way my makeup is done.