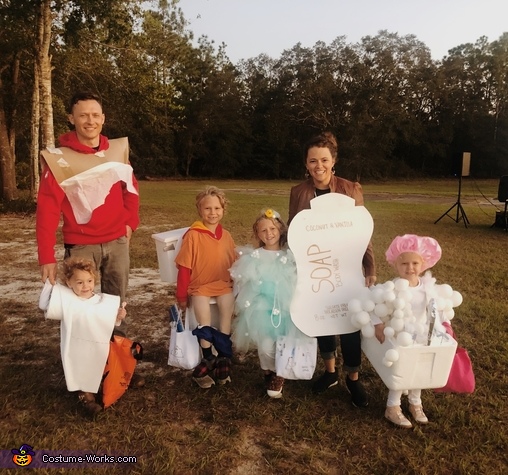 A word from Tenisha, the 'Family Bathroom' costume creator:

In the midst of this year we knew we wanted to use toilet paper as a costume. That is where this idea started from. From there the theme grew into an entire bathroom for the family. The girls being the "clean crew" and the boys being "the dirty ones". We had a lot of fun making the costumes. The overall cost was close to nothing because most materials used were things we already had (cardboard, tape, poster board, tissue paper, and fabric). We spent roughly $10-15 out of pocket on tulle, t-shirts, more tape, and balloons to make all six costumes possible. Here is how we did it: the toilet paper is made from cardboard and fabric, simple wrapped and cut holes into it. It went onto my son (over his head) with ease and it was nice and soft for him to wear. I drew the lines on it with a marker. My other son's idea was to be a toilet, so he is sitting on a toilet which he thought was just absolutely hilarious. The toilet itself is made of more cardboard, some foam board, and poster board with lots and lots of white Duct tape. His toilet is held up using suspenders attached to the sides. The fake legs were sewn by me and stuffed with cut up pool noodles and polyfil. Once we had two boys pertaining to the toilet, it only seemed natural to have dad being potty related too. He is an empty toilet paper roll. His costume is made from poster board covered with builders paper, box tape, and some white tissue paper. And took just minutes to make. Then onto the "clean crew"- the girls. My oldest daughter was a loofa. We used a simple t-shirt from the craft store and tulle (about 10-12 yards). I cut the tulle into several 1 yard pieces then layered those (4-5 per pile) and attached those to a elastic band I measured and sewed together for her chest and then her waist. There were four piles per elastic band (one on each corner). To finish it I sewed a couple onto her shirt and added little white balls for bubbles. We also made her a simple headband with a rubber ducky. My littlest daughter was in a bath tub, which was surprisingly easier than I thought. The base is a white styrofoam cooler. I cut a hole in the bottom, attached fabric using sewing pins for shoulder straps then added lots of 5in balloons for the bubble bath effect. The faucet was made out of cardboard covered in chrome Duct tape. I also attached a few balloons to her white t-shirt. My costume was just a simple poster board made to look like a SOAP bottle, with rope to wear it. We got a lot of laughs for our costumes and had many people do double takes. It was a lot of fun and made us all giggle during the entire making and wearing of the costumes.