Tooth Fairy and her Favorite Tooth
by Jesse 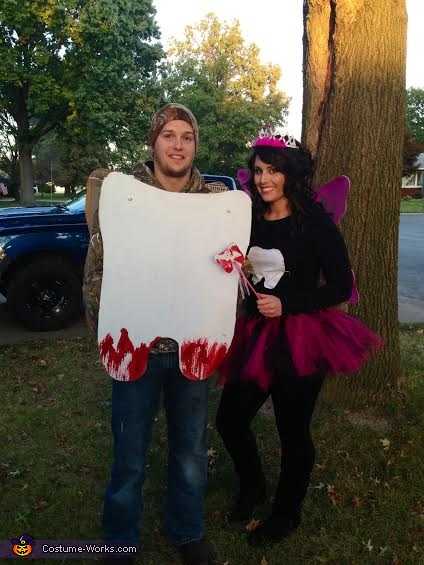 A word from Toree, the 'Evil Tooth Fairy & a Bloody Tooth' costume creator:

This is a picture of my boyfriend & I. The idea came from pinterest, but most of the DIY couples costumes were cute tooth fairies & fancy creative tooth. My boyfriend is redneck, so there was no way I could get him to be a tooth without adding a twist to it.

i mostly own black items so I decided to do an evil tooth fairy & a bloody tooth instead. This entire costume costed me less than $15.

I bought two different colors of tullu from walmart to make my own tutu, and I also bought some ribbon. This is a no sew tutu, there's directions if you google it. I took a strip of elastic & made it equal to my waist size. Then cut the tullu & made knots around the elastic (there's directions on google) then I added the ribbons in between the different colors of tullu.

I already owned a black long sleeved shirt and a friend of mine used a sewing machine to put the tooth on the black shirt.

I bought the wings from target, and also already owned the crown. I bought a wand from dollar tree, but I broke the end of it so I could attach a tooth to it. I took a card board box and cut out a tooth, then painted some red on it & glued it to the end of the wand.

My boyfriend took a card board box and cut out a tooth. He used some kind of string to attach both sides. Then he painted the bottom red.

I paired my outfit with black leggings and black boots.