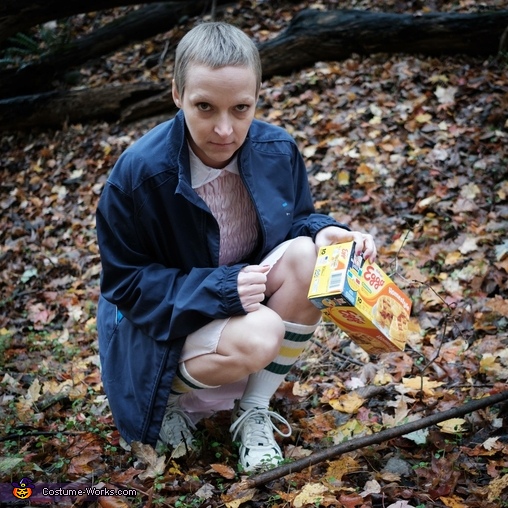 A word from Shelly, the 'Eleven - Stranger Things' costume creator:

We all know “Stranger Things” was the binge hit of Netflix last year and those of us who watched it looked forward to Halloween this year when Season 2 would be released. Little did I know how perfectly the timing would work out for me. I was diagnosed with breast cancer in January of 2017. I went through 5 months of chemotherapy and then had a bilateral mastectomy in July. Of course, I lost all of my hair during that time. But it started growing in at the end of summer and I realized in September that it would be the perfect length to be “Eleven” at Halloween time. When you don’t have much hair and no breasts, you make the best of it by dressing up like a pre-pubescent girl with buzzed hair. 😆 I love how it all came together. The dress and socks came together in a package that I ordered online (as much as I love the thrift store hunt for costume pieces, I’m still going through radiation and didn’t have the time or energy for that.) But I was able to find the jacket at the thrift store, and had the shoes at home. Obviously, the Eggo box was simple to find. No joke- dressing up like Eleven was the best I have felt since all of these physical changes have taken place. It was the only time that everything felt “just right” with my look. I loved it!!! And my husband did, too. So he was very willing to snap some good photos of me at the local park. I hope you all love it as much as I enjoyed dressing up as her!!