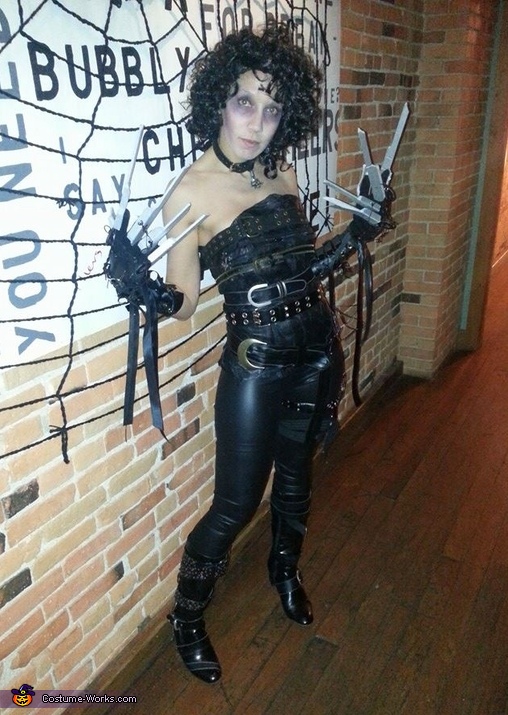 A word from Tawny, the 'Edwardia Scissorhands' costume creator:

Along with most teenage girls in the early 90's, I fell in love with Johnny Depp as Edward Scissorhands. I have always loved Halloween and the chance to dress up and be someone else even if only for one night. This year, I decided to take on the challenge of dressing as one of my childhood crushes :-) I scoured our local thrift stores for belts, buckles and leather coats and hit the jackpot when I came across an old Mens XL leather coat that appeared to be made of many pieces of leather stitched together. Score! I also bought about a dozen belts, a small womens leather coat, some pleather from a fabric store, and a bunch of eyelets, zippers, cording, brads, D-Rings, Strapping and an eyelet hole punch and setter. I began by cutting the sleeves off the coat and stitched them together to make a corset. I added large eyelets so I could lace it up the side. Many of the belts were stiff and unusable, so I cut them off the buckles and made new belts. I added brads and more eyelets to the strapping to give them some visual interest and set them apart from the corset. I loved the jagged look of the unfinished leather so I left most edges unhemmed. I added a strap that attached from the lowest belt to two additional belts that wrapped around my left leg. I decided to go with leather looking pants instead of a skirt so as not to distract from the detail and to stay as true to the character as I could. The boots were on their way to the thrift store anyway but instead I used the sleeves from the womans coat to add some stitching detail to the boots as well as belts, eyelets and a lot of hot glue :-) Next I began working on the main attraction, the scissorhands. For this I cut up some dollar tree foam and glued them to the sides of some cheap knit gloves. I added a top piece to each finger to give the scissors some depth and so they wouldn't just look like they were glued on the side of my fingers. I spray painted them silver and added different cording to attach them to the cuffs. I wanted to be able to wear the cuffs separately from the scissorhands so I used velcro on the knuckles so the cuffs looked as though they were one with the scissors. The cuffs were made from pleather and I added eyelets and ribbon once again so they would strap firmly to my wrists (corset style) and embellished each one differently with small belts and D-rings and brads. I also managed to find a small hand clutching a circle that I incorporated into a choker necklace. I bought a small travel sewing kit and pulled the plastic handles off the scissors and used wire to create smaller handles and attached them to the circle to create a small statement piece. Finally, I added a Rocked out Zombie wig and make up to complete the look. I had a blast making this costume and I was quite pleased to go out on Halloween and show off my one of a kind creation. Thank You!