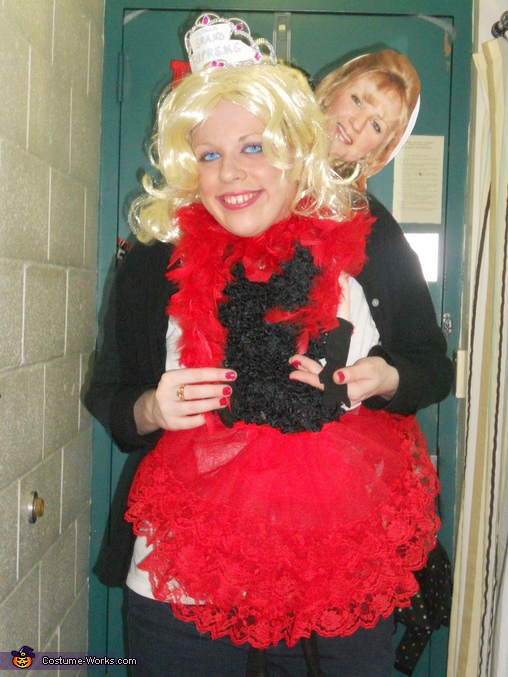 This homemade costume for women entered our 2011 Halloween Costume Contest.

A word from Kailynn, the 'Eden and Mickie Wood' costume creator:

Every year for Halloween, I like to come up with unusual pop culture based costumes. This year, I decided to be Eden Wood, a pageant queen from the tv show Toddlers & Tiaras. I didn't want to look like a princess though so I took it a step further and decided to be both Eden and her mom, Mickie, all at once!

Using a red lacy tutu-like skirt I found at the party store years ago, I made a child sized red skirt. I took a stretchy, black satin shirt I found at a drugstore and sewed it to the skirt. Using white and black felt, I created arms, legs, gloves, and boots to go with the dress I created. I then had a toddler-sized body. I sewed the body on to a plain white t-shirt, and when I put the shirt on, it looked like I had a mini body attached to my neck. I wrapped a feather boa around my neck and it completed the outfit part of "Eden's costume." I wore a curly blonde haired wig, ice blue contact lenses, and put on a ton of bronzer and other makeup. (I am a very pale red-haired college student so becoming tan like a pageant queen was the hardest part!) I then took a tiara and added the words "Ultimate Grand Supreme" to it. (That is the highest ranking title you can win at a beauty pageant.) Finally, I took a cute out of Mickie's head, attached it to a paper plate, stapled a tongue depresser to it, and safety pinned and taped the head to the back of my Eden shirt. I put on a sweater and a pair of jeans and voila! I was Mickie Wood carrying her pageant queen daughter, Eden Wood, from Toddlers & Tiaras.