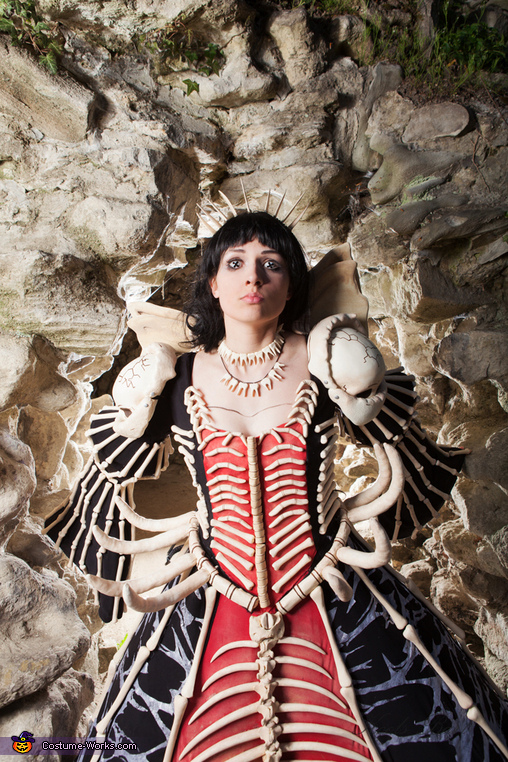 A word from Stephanie, the 'Dinah Bone-dress' costume creator:

Being a fan of the manga Bizenghast (which I happen to stumble upon during my MCM London visit) I just wanted to express my fandom and making this challenging design!
At the end it took my 2 years to make it, aside my full time work.

It was an extreme learning experience as a lot of other new materials were used such as latex (for moulds etc), expanding foam (2 components and normal version) worbla and paper maché. The rest was fabric, wood (mainly mdf), different types of glue, wire, craft foam, paper, lots of paint!, velcro, strings, little screws, metal parts and wonderflex.

The trick was to create a dress as light as possible and easy to transport without the risk of breaking pieces. For example 3/4 different construction crown and ox bones versions + 4 different "hip" bones were made before getting the wanting results.

The start point was an existing underskirt but that was quickly replaced with a self-made black one and recovered metal boning. Added some black tulle for more effect.

The far easiest part was the gown. Except for the corset and the upper sleeves as a few different models were made. (back then: not owning owning steel, rounds corset boning and descent corset books!)

The next step: jewellery time! Making some teeth. These were cloned, sanded, painted and combined with screws from old little cell phone figurines and leftover jewellery parts: strings, chains, ...

Thirdly the back part. It looked at first like it was the shoulder blade: Scapula, at least it would have been more logical. But is was the pelvis, better known as the hip bone. Made from different materials with an attachment method.

Then came the bones. Thanks to a family member who happens to be a butcher, the first ox bones were retrieved. Everything was cooked with vinegar to clean it completely. Later on several visits were made to a Antwerp butcher to retrieve more. (yes it is hard to find!) Moulds were made and in total 14 real bones and 5 fake ones were used. On purpose to prove that the fake ones were well made.
The skulls were made from a lucky find mould, the jaws were completely made from scratch. Several bones were tried out: chicken bones, lamb bones, ... but none of them gave the result for the other bones. So an example was made and cloned.
By accident I stumbled upon the matching real bone for the central piece. All other bones were made, sanded, painted, ... the whole time long. With a bad summer, long drying times it was impossible to finish it completely that year, so it got postponed to the year after. In total I have made about 500 bones. Some were bad experiments or dried wrongly.

After work: details were added, mostly painted on the bones, added effect with make-up and the nice spider web.

The spiderweb is actually an unusual fabric used for decoration purposes. It was retrieved in a Maison Dorée store in Brussels and it is very easy to iron. It was cut (based on the original enlarged drawing) and glued on to the dress.

Most time was lost in finding and using the right materials, the right paint and the right attaching methods. Of course the shapes mattered a lot too. Not forgetting the issues you come across with certain parts when they are made and need to be combined and/or attached.

Frustration was definitely a feeling in the making process. There was a moment when all negative experiences came together combined with personal, private changes which caused me in naming it "my doom project". I could no longer work on it for a few months. Also for the first time in my life the big question popped up: "continue or quit?" (knowing it would cause more work, time, money and all... ) But 90% was already finished so not finishing the costume seemed wrong and sad. Eventually it proved 2 things: my love for the character and determination.

This doom project has far been the most difficult and challenging cosplay I have ever made. But the satisfaction in completing a project has never been soo high!!

Bart and I went on a suited location to bring more justice to the costume. The eye contacts are real!