101 Dalmatians and Cruella DeVille
by Amy 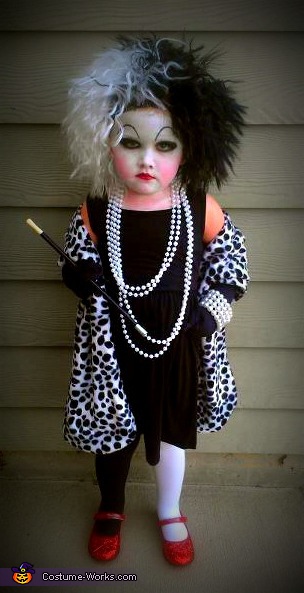 A word from Carrie, the 'Cruella DeVil' costume creator:

My four year old daughter, Jailyn is absolutely in LOVE with 101 Dalmations and has been watching my childhood VHS copy over and over again for what seems like forever! Anyone could dress up as a Dalmation but I had never seen anyone as little or as adorable as her dress up as the evil Cruella herself! They do NOT make that costume for small children soo I put the pieces together myself by studying scenes from the movie. I found the dalmation print and my great friend at Bee's Bowtique made the wrap for me! She was a total hit and it was soo much fun to do together!