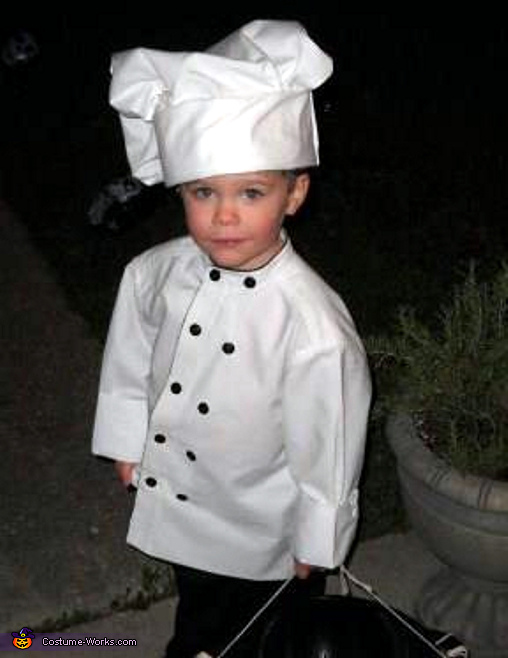 The best thing in the kitchen!

A word from Jamie, the 'Chef' costume creator:

My son was 18 months old for his second halloween, and was not yet really "in" to anything. His favorite thing in the whole world, however, was cooking with his Daddy every evening. So, when I asked if he wanted me to make him a chef for Halloween, he was super excited! I wanted to make sure that he would have a costume that was comfortable, and would not make that whole tricky walking thing even more difficult for his chubby little legs. So, the pants are simple black stretch pants, which compliment his lovely black crocs. ;-) I bought a youth's button up, heavy white shirt to make the chef jacket. I removed the buttons, then sewed two rows of black buttons, and used black paint for the outlines. The hat was made from the excess fabric removed from the shirt/jacket, which I hot glued onto the rim of a floppy hat. I finished the whole thing off by tying butcher's twine to our colander, which was used as his candy basket! I do believe that he is still the cutest chef the world has ever seen!