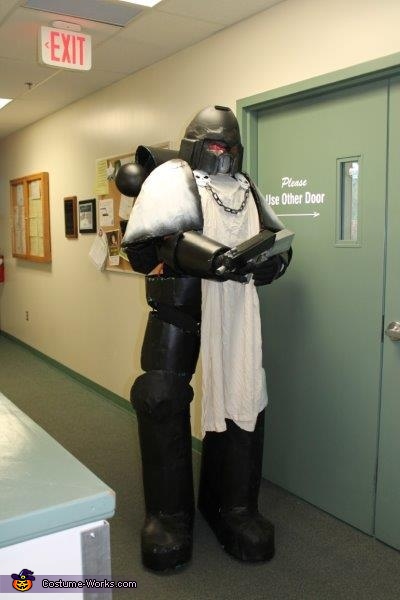 A word from Zach, the 'Black Templar' costume creator:

I am wearing the costume in the photos. I stand around 5'8" normally, but with the costume on I stood around 6'11".
The idea is from the Warhammer 40,000 tabletop war game, Space Marine army, Black Templar chapter.
I built the frame for the armour out of PEX piping, with chicken wire attached to the frame with tie wire. I used construction paper as the 'skin', sprayed with black and white plastidip.
The helmet is made from a salad bowl, PEX, and a cheap robot mask I found at the dollar store. The Bolter (gun) is made from a dollar store sniper rifle which I modified with foam board and spray painted/plastidip-ed.
The backpack is made from a a PEX frame, four small wicker baskets, two halloween shackle balls, and a skull mask.
To obtain the height I needed, I built stilts into the lower leg/foot pieces out of PVC pipe and connectors, and small wooden platforms I cut to stand on.
Topped off with a cut up bedsheet and modified dollar store halloween decorations for the details on the front.