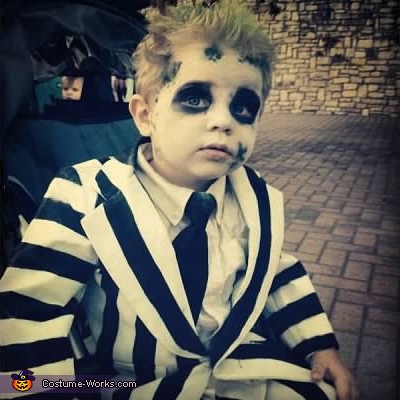 A word from Brittany, the 'Beetlejuice' costume creator:

I made this costume for my son (He's Two). I really just wanted him to be Beetlejuice so bad for Halloween, I thought about how dang cute he would be, but after looking for a costume to buy it was clear that I was on my own. I decided to start looking in second-hand stores for little suits... and I was very lucky, because I ended up finding a baby blue tux in his size, that had a stripe pattern to it!!! I bought it, and took it home, I followed the lines and painted the whole thing one stripe at a time... it took about 3 day's... My son had some black boots, and I bought a cotton dress-shirt which I soaked in tea for about 15min to give it a dirty look. I found a clip on tie, which I also had to paint... For a fun extra touch, I bought some plastic beetle bugs, and hot glued those to a few places on the costume. After putting the whole costume together it was EPIC! I loved all the reactions to it! People were even stopping to ask if they could take a picture with him. He really was like a tiny celebrity.