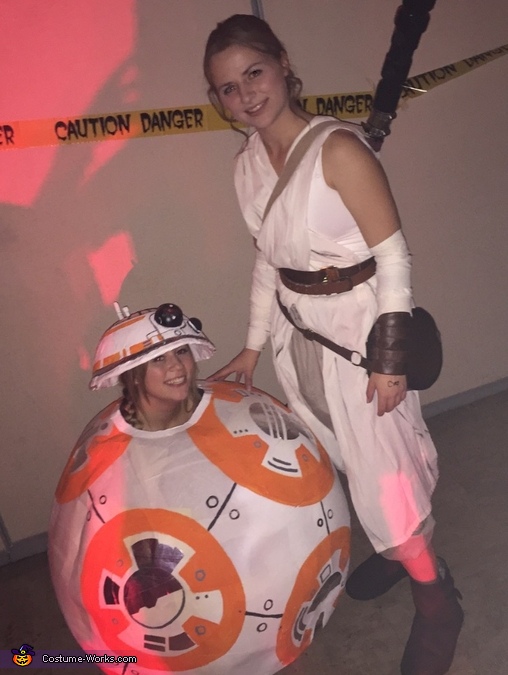 A word from Miriam, the 'BB-8 and Rey' costume creator:

My sister, Adrienne and I decided to dress up this year as BB8 and Rey from the new Star Wars movie. You can call us a bit of nerds as we both love everything sci-fi and fantasy, and we thought what would be better than the new Star Wars movie as it appeals both to a younger generation and an older one. She is dressed up as Rey with a home made costume constructed out of pieces of fabric, a purse painted and hot glued to look like a canteen, and her staff which is made of PVC pipe, solo cups and balsa wood, which was all spray painted black. I then dressed as Rey's droid, BB8. The BB8 costume is made out of cheese cloth, paper towels and white glue, which was used like paper mache on the outside of a large beach ball and left to dry. Once dried, the ball was painted white and orange and decorated with silver duct tape. The head was made in a similar fashion, with antennas made of paper and duct tape, and eyes made out of painted bottle lids and half of a ping pong ball. However, the best part of the costume was the small scooter and rope, that I sat on as BB8 and Rey pulled me behind her so it looked like I rolled around and followed behind her all night!