Army of One Costume 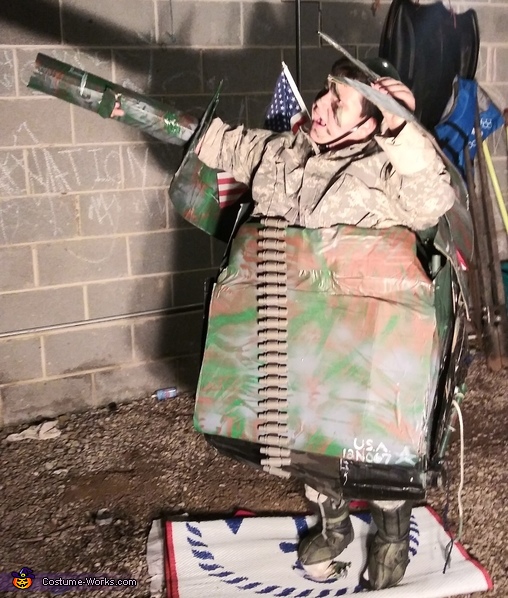 In the tank suit! Front

A word from Jessica, the 'Army of One' costume creator:

My family and I experienced the devastating loss of my first born son on a halloween morning years ago... For a couple years Halloween was not something we looked forward too. Finally a few years ago, I decided to change that! I started encouraging my children to create their own costumes!
This almost immediately changed my children's outlook on Halloween!!
.This year my 12 yr old son Billy wanted to be in the Army! But not just a soldier he wanted a "transformer" like tank soldier!(His words!)
The tank has a pvc pipe frame and cardboard box covered with different colored duck tape! It took about 3 weeks ( mostly because of trial and error reasons!) We used washers and screws in the cardboard where needed, and then tied overall straps to the pvc pipe that would allow the suit to hold on to him. Finally after a crash course on spray painting camo we painted the tank! (We had lots of fun with that!) The card board was obtained from shoe boxes / pizza boxes etc from around the house. The duck tape cost about 12 bucks ( you have to shop around because some places will charge almost 3x what other places charge!?) The pvc pipe and pvc glue cost a total of about $15. The tank is held together in a number different ways: staples, duck tape, glue gun, screws, and bolts (you have to get ridiculous with the washers tho so the screws dont pull thru!! We dressed him in army attire which we also had from home,painted his face and BAM you have a "transformer like tank soldier", or what my daughter has cutely renamed an American Hero!