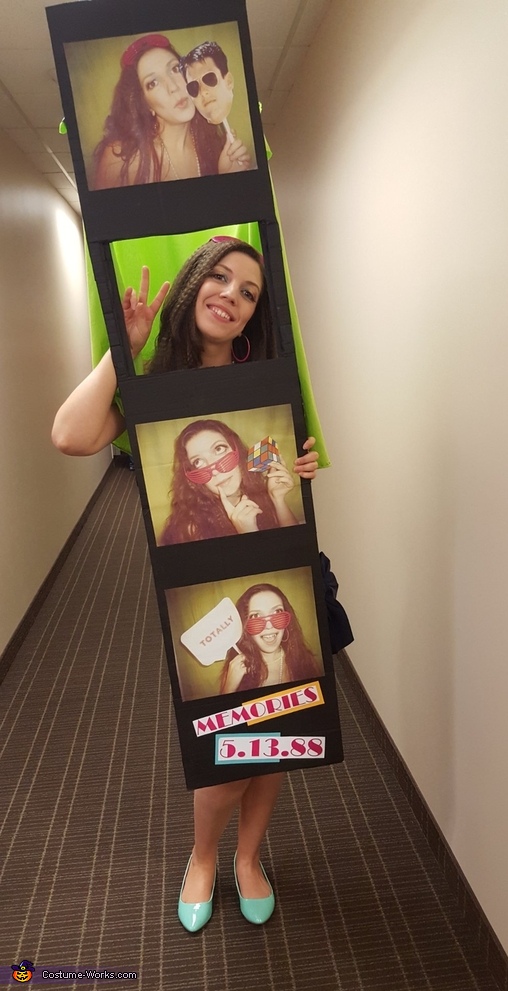 A word from Natalie, the '1980s Photo Booth' costume creator:

I wanted to create a costume that was like the printed photo strip you'd get from a photo booth, with a cutout square where my face would serve as a "live" box with me posing for pictures. But I wanted to add another element to it -- make it a themed photo booth. So I decided to go with a photo booth from the 80s. This also gave my costume another element, allowing me to take the photo strip off and still be in costume.

First, I started with taking pictures for the costume. I set up a photo studio in my bathroom with a neon green backdrop and took a bunch of goofy pictures with 80s props and dressed in 80s gear. Then I printed them on large paper from my computer.

Next, I made the photo strip. First, I started with a large cardboard box and cut an appropriately-sized strip. Then I painted the cardboard black. Next I glued the pictures onto the strip and cut out the square for my head to show through and wrote "Memories" and a date from the 80s to give more context for the costume.

On the back, I glued on two long, thin strips of wood to give the photo strip more stability to stay upright. Then I created kind of a shower curtain to put the neon green backdrop behind me to match the photos from the strip. I also screwed on two brackets to use as handles to hold the costume, but later I also tied string around them and then wove that string around my neck to hold it up and free my hands to play with props.

Lastly, I found an audio file of a camera snapping pictures on a loop, and played that from my phone while I posed for pictures in the "photo booth."