Barbie in the Box
by Lisa

Ken and Barbie from Toy Story 3
by Alan

Barbie in the Box Costume

I've always been a fan of Barbie. I saw the Barbie in a box costume before and wanted to make it even better. So my idea was to make the box bigger. 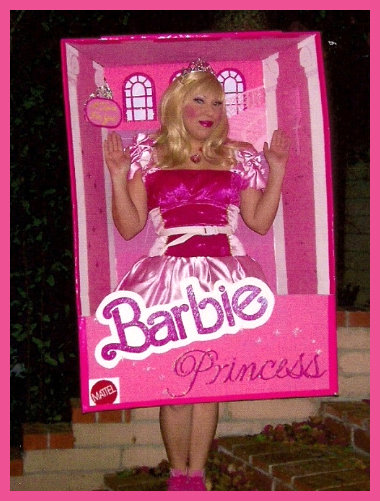 Lots of work went into the DETAILS here

I used a wardrobe box I got from u-haul for about $13. I planned on putting accessories in the box so I needed to make the box wide enough for people to be able to see them. I just cut the front panel and glued the top flaps together. I put the panel that I cut aside to use it as the bottom part of the font of the box. I painted the entire box white to cover the pictures on the box. Then I hand painted the pictures on the box free-hand (I've always been an artist so I draw pretty good). 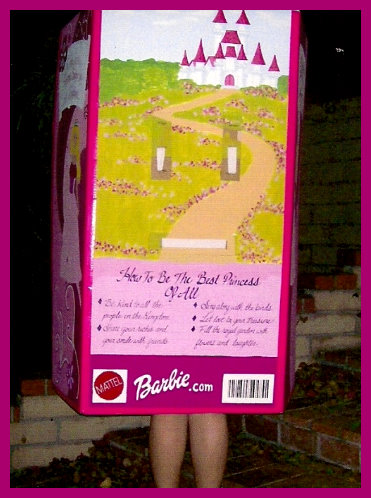 I did get ideas from various Barbie boxes. I painted the front panel separately used duct tape to attach it to the box. I also put duct tape around the edges of the box so it was more stable (I used hot pink duct tape). Then I added my accessories. I got a cheap tiara to put inside the box as the "tiara for you". I cut another piece of cardboard to glue under it to hold it up. Then I put little holes in the cardboard to hold the tiara in place then I used craft pipe cleaners to tie it. Then I needed the signature Barbie brush. I couldn't find a pink one large enough so I painted a paddle brush and used the pipe cleaners to tie it to the box. Then I needed to put straps in the box to be able to walk around in it. I cut 4 slits in the back for shoulder straps and 2 on the bottom for my waist. I put pieces of cardboard on the back where the slits were for support, so that it wouldn't give or break while I wore it. I used white belting for the straps and attached parachute clips to make it easy to put on and off. Measuring is important in order for the box to be comfortable enough to wear and walk around in hands-free. I made the straps a little too high at first and had to make last minute adjustments so my head wouldn't hit the top of the box. For my outfit I wore a wig and blue contacts to look Barbie enough because I look nothing close to her. 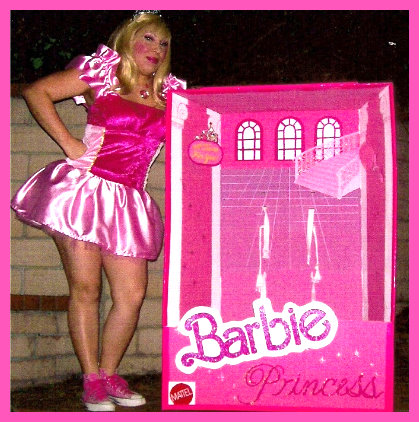 Barbie out of Box

I couldn't find 'barbie' enough dress so i just made one. I got the jewelry at a toy store and everything blinked. The entire costume took me about a month to make. But it was totally worth it!

If you don't have the time or the inclination to MAKE a costume this year. If you've thought about it, but your heart, for whatever reason, JUST isn't in it... You can probably purchase a costume of the type you were planning to make...and maybe even for about the same as you might spend on the materials to MAKE a costume. On the other hand, you may look around and spot a Costume that changes your Costume plans completely.