Up! Family
by Christy

Up: Mr. Fredrickson, Kevin, and Russel
by Stephanie

House Carl Fredricksen From Pixar's Up

Carl Fredricksen and Russell from Up
by Amy

Up Movie Costume: House with Carl Fredricksen, Russell, and Doug 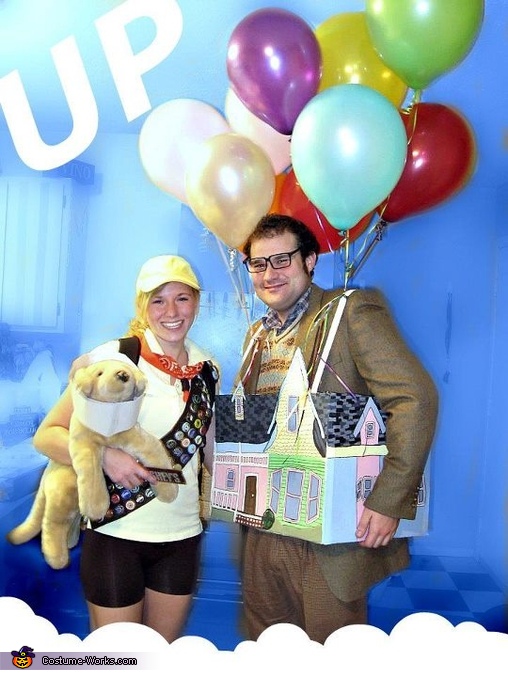 Adventure is out there!

A word from Rachael, the 'Carl Fredricksen, Russell, and Doug' costume creator:

Last year my boyfriend finally agreed to do a couple's costume. :)

He went as the house from Up, and additionally as Carl Fredricksen inside the house. The house was made from a large cardboard box, which was cut and painted with arcrylics in order to resemble the movie. Hot glue and wide elastic were used to create straps to hold up the house, and balloons were tied to the top of the straps. All of the clothing he is wearing is from his own closet, with the exception of his glasses - which were 3D glasses with the lenses taken out. Similar Carl-esque clothing could easily be located at a local Goodwill.

My Russell costume's sash was made with felt, bottle caps (since we were going to a college party - beer bottle caps)and hot glue. The rest of my outfit (shorts, polo, backpack, bandana, hat) was found in bits and pieces on ebay and amazon, but could be located in local thrift stores as well. Although you can't see in the picture, my backpack was loaded up with fun-size chocolate bars to hand out to party-goers ... or just in case we saw Kevin.

Doug was on loan from my little sister, and his collar is just some tape and paper.