Gnomeo and Juliet
by Jaime

Whether Married for 30 years, or in a new-found relationship... daily routines and even the simplest stresses of life can make surviving as a couple a very difficult thing at times. HOWEVER! Help is on the way! Halloween is rapidly approaching and it is time to throw your cares and worries OUT the window and slip into the skins (or clothing) of your favorite Duo! "FUN", as a couple, can go a long way in keeping the romance kindled in your hearts. 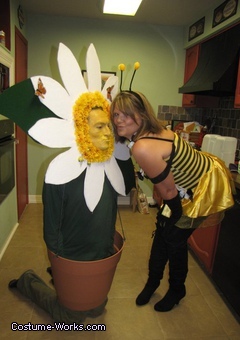 Before I start telling you of the best Couples Costumes let me just say that we can likely, VERY likely, find ready-made Couples Costumes at most any of the on line Costume Stores. BUT! Some of the most creative costumes are the ones made by us at home..with our own personal touches. We often may need to purchase a few Costume Accessories to go WITH a Homemade Costume, such as, Cleopatra's Headdress which might be REALLY hard to make although her clothing may be very easily draped and sewn. Whether you decide to CREATE your Costume, or Purchase it..the point to it ALL is..."FUN".

These great couples costumes are from our annual online Halloween costume contest:

"Pretend" isn't only for children. You and your other-half may want to step into costumes of your Favorite Romantic couple.... then let the "romance" flow Ü. How could THAT not be good for your love-life?

There are many famous, what could be called "Romantic" Couples Costumes to choose from: How about... 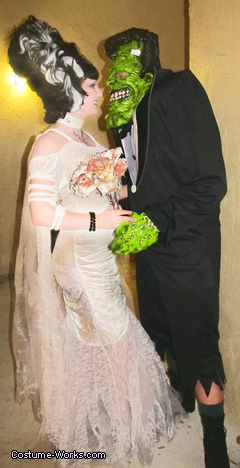 Frankenstein & Bride of Frankenstein
costume from our 2011 Halloween Costumes Contest

Oh my goodness..I can't forget the MOST romantic couple EVER! Adam and Eve Costume. Ü I have seen this costume in the online stores or it could be homemade if you found the right materials. Basically you need a skin colored (light tan) body suit each..some leaves..and some glue. There are MANY MANY costumes for couples that I want to mention so I suppose I won't be able to describe each one. I'm sure though, that once you get the idea..You will know JUST what to do as far as Purchase vs. Make. An idea that works for couples also is to go as the male and female version of the same thing/persona. Some ideas here are:

Then we have Couples Costumes that go together but that don't have and particular category. I wouldn't want to put them under "romantic" costumes for example..because... like Luke Skywalker and Princess Leia..they are brother and sister. Ü So let's begin there:

There are also FOOD Costumes that do well for Couples. Foods that GO together...Just like you and your significant other. There are also "Things" that go together. I have seen some in the on line stores and some I've seen in person or in my travels on line. It's up to YOU to figure it out if you see something you like Ü. I'll put down some Couple Costumes of Foods and Objects that go together, that I can think of, below: 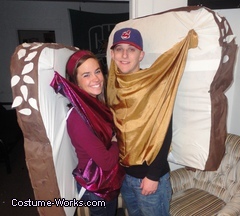 And for a few "thing" Couple Costumes.

I was going to say "That about does it" HOWEVER!..I MUST mention one funny/cute Maternity Costume for a Couple: I believe it's called "A Bun in the Oven" and, obviously the woman is an oven (It looks light weight material and plastic) and the man has a Chef's hat on and an Apron that states something like "Bun Maker". TOO CUTE! 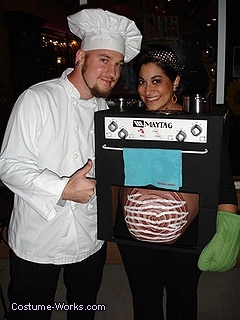 So there we have it. I've about drained my brain trying to think of all of the Great Couples Costumes out there. Before I close let me say one thing to the ladies.

Ladies, I learned something from one of my X-Husbands (VERY "X" Ü if you know what I mean.) I let HIM decide a couples costume for us one year. It was his idea to be a HORSE! (Poor man... he thought that because the costume needed 2 people it could be considered a "Couples" costume. Well.. to make a long story as painless a memory as possible. I ended up being the horses behind (literally AND probably mentally also.).. and it was THE most UNROMANTIC experience of that marriage. So, fair warning Ladies. IF your man wishes to be an animal that's one thing. You just make sure that you don't end up on the wrong end of the deal. Happy Halloween Couples! I wish you fun and friendship with the person who is your partner. Most of all... I wish you Love.