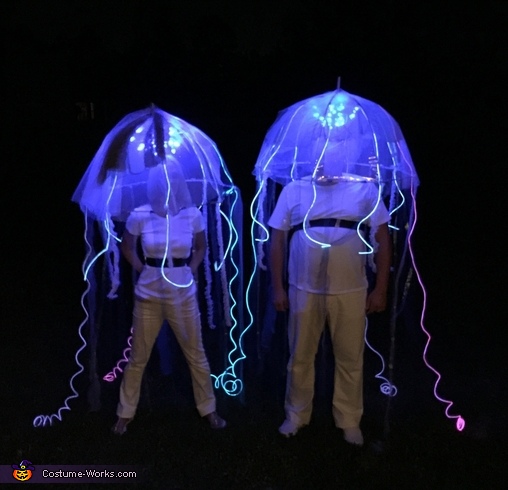 A "Bloom" of Jellyfish (This was taken in the pitch dark)

A word from Ashleigh, the 'Glowing Jellyfish' costume creator:

We live in FL and Jellyfish are in season. While boating, we were in a swarm of Jellyfish and the idea started from there. Shortly after, our 15 month old son was watching “Shark Tail” and he loved the reggae Jellyfish. That sealed the deal.

We used the following items:

You can also make this costume in a hand held version instead of a wearable harness. In our case we wanted our hands free so that we were able to interact with our son and the environment. Also, your kid may be able to wear the umbrella hat instead of it being strapped to his body. Our kid was too small to wear the umbrella hat. Also, visibility is questionable at times, you need to consider the environment you are wearing the costume in.

We got fantastic reactions!!! People loved the costumes everywhere we went. It was very surprising how many people wanted photos of us and gave us great feedback.