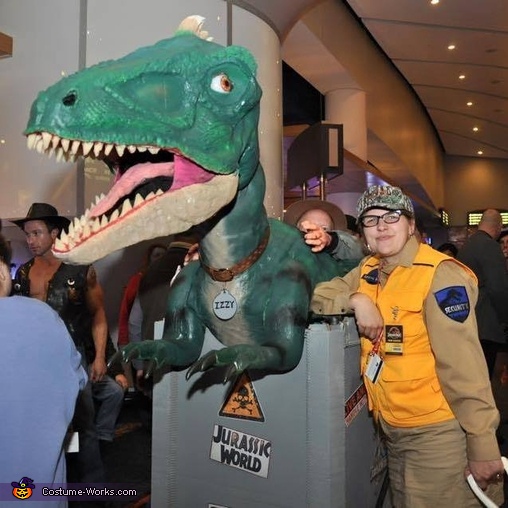 at the halloween event we entered

A word from Terry, the 'Izzy the Jurassic World Dino' costume creator:

This costume took over a year to build, over 1500 hours. Originally started the build in a small apartment, and had to be moved to a garage for the final steps. Had to make a frame rack to get it in and out of a van for travel. It has a lower box frame that is built to be clasped. The jaw opens, eyes move and blink, the tongue squirts water, and it roars loud. It is 12' long, 7' tall. Made with many garage / household items, and a lot of springs and electronics, so the head moves in many directions that is steered by a steering wheel. Weighs about 180 lbs. The outer skin is done with foam, nylons, and painted caulk. Looks and acts just like skin. This is the first year to have this out and really finished it the day before Halloween 2015, Just in time for Jurassic world release. It really had bad luck in the two events we entered. It was by far the best thing there but didn't get the votes needed. Its name is Izzy, in honor of a friend I recently lost. My head sticks thru the opening, and it appears like I am riding the tail. Its on wheels and my wife (Julie) pulls it around.....This would be a good candidate for most creative.