Everything is Awesome The LEGO Movie Costume 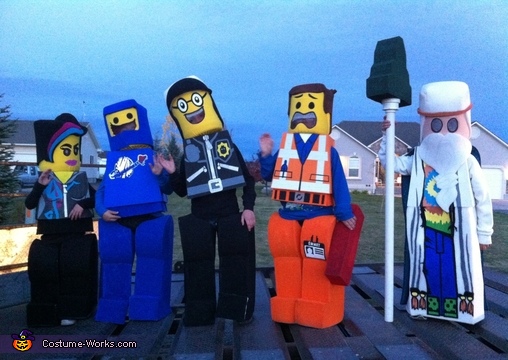 Everything is AWESOME!!! Kids ready for the parade.

A word from Rebecca, the 'The LEGO Movie' costume creator:

Everything is AWESOME now that the costumes are almost complete! We just need some minor tweaking so heads aren't bobbling and feet aren't scraping the concrete and a dab of touch up here and there from wear and tear. With an average of 30 hours per costume, this was an undertaking I had no idea I was going to complete. It seemed that each new step required new problem solving skills--from gluing my hands together (repeatedly), to having wobbly faces and painting foam that absorbs it faster than it can be applied--it was quite frustrating at times. It was many late nights and hours and hours spent with a husband that is a saint! My house deserves some recently awarded TLC due to the costume madness endured at all hours. Many steps were taken and repeated FIVE times for each of my children, ages 9, 8, 7, almost 6 and a best friend that is 8 as well. I was originally going to scale the LEGO costume pieces to be the actual proportions of a LEGO, but realized I wanted them to be more practical and functional so my children could actually walk--slowly, nonetheless--but they could trick or treat while wearing the costumes. Needless to say, my almost 6 year old daughter didn't even make it into the building for a Halloween carnival wearing the entire costume. But, I got my photo--with her bawling inside the LEGO head (mom of the year award here for taking a picture of a crying child which no one actually knew since they couldn't see her sad little face). We got creative and googled LEGO costumes and realized there wasn't one sure fire way to make it how we wanted, so we chose ideas and the look we wanted to achieve to best suit our needs and the supplies we had (and countless we bought for more money than I wanted to tell my husband about but did). Halloween is only once a year, right? It was a lot of trial and error, "please just try this on one more time to see of it fits right," and a let's give it a go and try it out one last time mentality that got us through. We use empty cheeseball containers for the heads with a slip cover with elastic lining over top. Isewed the eyes (using masking tape to reinforce the fabric) with a plastic black mesh screen underneath. the torsos were made of insulation found at Lowe's, cut, and glues using Gorilla glue. i also added some
Pieces of foam attached to he botton of the torso to make it more authentic. Thelegs were made of 1/2" foam, cut and glued into 3-D lego pieces. painting them took FOREVER, as the paint absorbs into the foam. The staff was plumbing pipes (my hubby is a plumber) and the top part was thick foam cut to shape. We used super glue to attach the pipes together so blue glue wouldn't leak down. The gluing was tedious and extremely time consuming. Sometimes being a mom of children with special needs in school AND making elaborate costumes, all the while volunteering in their schools and at the local public library is not extremely conducive to sleep. :) But, I thank those who helped brain storm problems and work through the challenges--my husband especially for going along with one more crazy project idea that started small and has ended with an AWESOME positive experience for the family. These were so involved. I still have the files I used to make them and I am willing to help out those in need. But, I've convinced the kids that if we try and sell their costumes, them we can go on a much needed vacation and buy some--you guessed it--LEGOS!! We think a trip to LEGOLAND may be well in order. The kids have agreed to dress in their costumes and take pictures at the local library for Family Read Week (hoping this works out smoothly) in November. Again, our family rocks and seeing the final product with their smiling faces and hugs and repeated "thank yous" was worth every minute of preparation and any amount of frustration in making The LEGO Movie characters come to life. I will admit--if I have to hear that song one more time soon, I'll be shoving random LEGO pieces in my ears and taking a mom minute with my friends Ben & Jerry under a cozy blanket. Alas, in the end...everything is AWESOME!