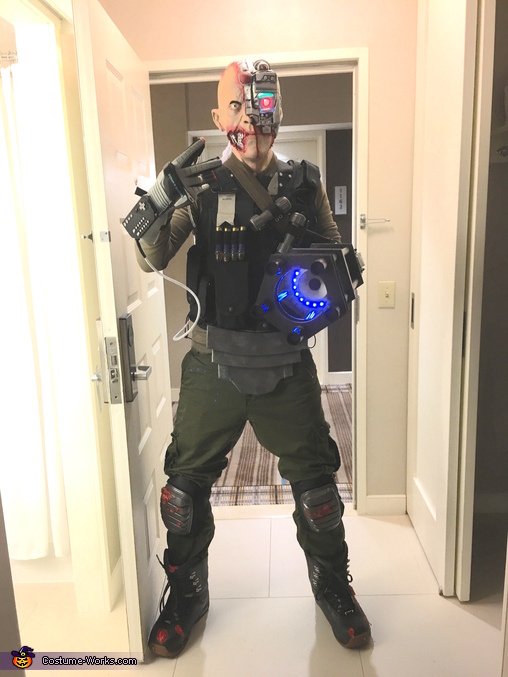 A word from Scott, the 'The Borginator' costume creator:

The inspiration behind my costume came from the MorphSuits.com Digital Dudz mask that my brother showed me. It incorporates a smartphone in the face to create an App-active display of the “terminator scanning eye.” I bought the mask in January and worked on the costume up until the last minute, finishing the LED wiring of the gun, the day before Halloween. The mask, tactical vest and holstered handgun were the only purchased elements and the mask was highly modified to make it my own.

Overall cost was around $250 a few hundred hours, and mowing the CNC operator’s lawn this summer for having helped me out for free. Tips? Overdesign, don’t paint until the part is tested, hairdryers hasten liquid latex curing, have fun and that everything takes longer than expected so start early if you want to finish right!

~ The breast plate and 3 piece pelvic armor were created out of fiberboard wrapped in painted canvas
~ Snowboard boots and worker’s kneepads were painted and gored.
~ “Remote grenades” included blue LEDs were made out of PVC coupling sections and fastened with snaps to bandolier that helped support the drill operated, rotating and LED light up Gatling gun.
~ Original NES Powerglove turned into hydration system that incorporated an icepack cooling system in the back of the vest and piped beverages into laced up mask.
~ Handgun clips cut from wood to fill vest pockets, bullets on front of vest created from empty shotgun shells and hollowed out 3w lightbulbs filled with black light reactive highlighter fluid
~ Gatling gun created from various PVC pipes, a Black and decker motorized screwdriver and 5 CNC machined “barrel holders.” 9v powered red LEDS were installed in each barrel and were hooked up to a multiswitch. White ring of LEDS continuously illuminated from second 9v.

Hard worked payed off as one of the best weekends of my life, I felt like Mikey Mouse at Disneyworld taking pictures with people all night long!