The Amazing Spiderman
by John

The Amazing Spiderman
by Dany 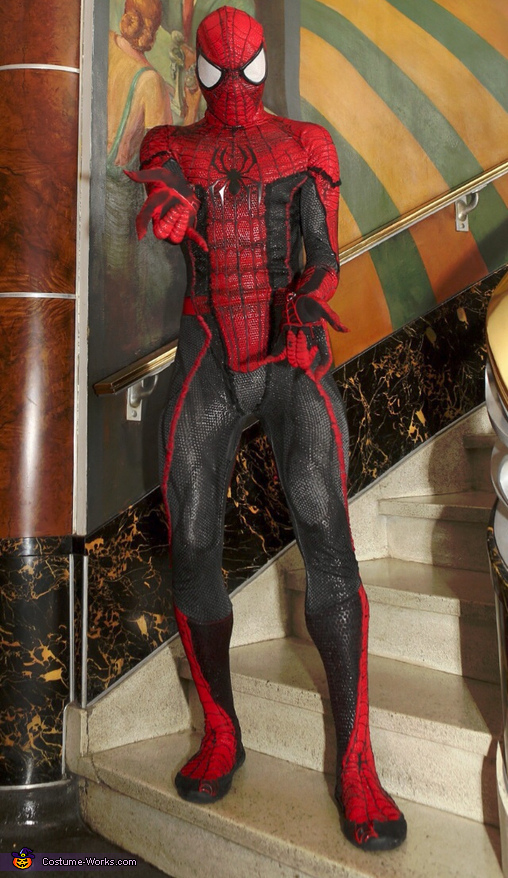 A word from Chase, the 'Spiderman' costume creator:

I'm wearing the costume, and ever since I was a baby basically I loved Spiderman. When I grew up to be the young teenager I am today, I decided that I should make a costume. I also wanted an awesome Spiderman costume, but the ones I would see online were so expensive (and not as good as this one either.) The suit comprises of the body, two detachable boots, two detachable gloves, and a mask. What I did was I got grey and red spandex and make a template, cut it out, ans stitch it together. I made a zipper that goes from the left armpit, down the side, across the lower back, then up to the right armpit. A U zipper. Then there is a zipper in the back of the neck so my head can get through and the back of the mask, a zipper in the back of the actual mask, and then one in the crotch so I can pee. Then I used fabric paint to do the muscle shading on the grey parts, you know, look make me look all superhero ripped and such. After that, I used washable marker to lay out where I wanted the web lines to go. After that I bought slick black, slick red, and matte black puff paint and made very single little hexagon on the costume so that it made a consistent pattern. It was brutally time consuming and patience testing, b! ut ended up being worth it in the end. The frames are molded out of onyx and the lenses are just perforated stickers and transparent film put together. The soles of the boots are just cut up aqua shoes glued to the fabric. The chest spider and the back spider are cut out of a urethane sheet, and the back spider was spray painted with crimson red and iridescent medium. For the webshooters, I molded little cones out of instamorph and sort of just glued them on to the gloves. People loved this costume, but I know that I can do better. So I'd like to invest more money into that.