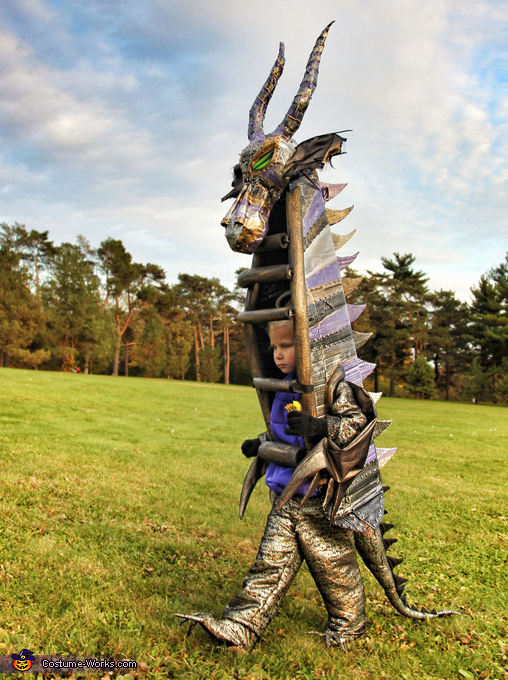 Maleficant Dragon on a stroll

A word from Kym, the 'Maleficent Dragon' costume creator:

My 5-year-old daughter is wearing a magnificent Maleficent Dragon costume.

We visited Disneyworld this summer, and of all the princesses and magical beings we encountered, the giant mechanical steampunk Maleficent dragon caught my 4-year old daughter's imagination. So a month before Halloween we set off to make her costume, entirely DIY. The head of the dragon is paper maché, the neck and back of the dragon is a cardboard box with hot glue and pipe insulation detailing. All blinged up with black, gold, silver and purple dry-brushed paint. The wings, tail, chest, legs and creepy talon feet are iridescent gold and black lamé fabric. Glow sticks add some eye drama. The "exoskeleton" is removable so my daughter could attend her school party and boogie her tail off.

Dragon girl literally stopped traffic as she wandered our neighborhood. People honked, opened their car windows and even pulled over to comment that this dragon was the best they've seen. Ever. Most expected to see a full grown man or a teenager, due to the costume's 6 1/2 foot tall stature, but then were delighted to see a kindergartner. They were even more surprised to see a little girl.