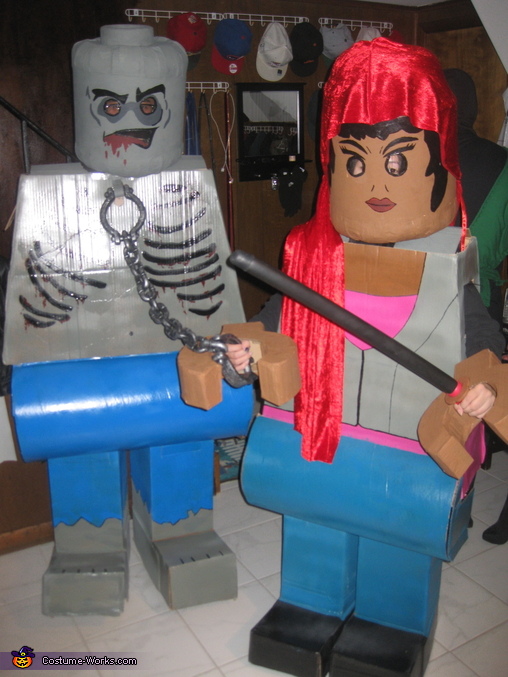 A word from Khuntha, the 'Lego Walking Dead' costume creator:

My girlfriend and I love The Walking Dead series so we decided to base our costumes on one of our favorite characters from the show who is Michonne. She's a very interesting and smart character in the series. She chains up armless zombies next to her to hide her human smell from other zombies. I thought this was a cool concept and makes for a cool couple's costume. Then we decided to make the costumes look like lego figurines because of its unique and awesome look.

Our costumes cost us about $60 and a weeks worth of work to create. The most expensive material was the glue gun with glue sticks which cost us $15. Then the 12'' cement tube cost us another $10 which we used for the head and the curves on top of the legs. Other miscellaneous items included the the chain, cape and sword which were all store bought. As for the paint, we went with acrylic bottles of red, blue, black, brown and gray. The last purchased item were 2 cans of Rustoleum Glossing paint at $4 a can.

Cardboard was our choice to make the costumes out of. I get them for free from my work place which save us money. Plus cardboard is easy to work with. The first thing we created were the heads to our costumes. First we measured our head from chin to the top of our head. We were both about 10 inches. With this measurement, we took the 12'' cement tube and cut out two 10 inches pieces. Now to make the unique curve of a lego figurine's head, we use a combination of empty paper towel rolls and paper mache. we cut the paper towel rolls into smaller curved C shaped pieces. Then we hot glued it all around the cement tube. Afterward we paper mache the entire curved section to make it uniform and smooth enough to paint. My girlfriend is a better artist than me so she ended up drawing and painting the faces. I had the duty of drilling out the holes for the eyes.

With the head done, we moved on to the body. We took measurements from our waist to the our shoulders for length, from shoulder to shoulder for width and the sides of our body for depth. However a lego figurine's body is a trapezoid so I adjusted the measurements accordingly. Also since the zombie costume is suppose to be armless, my arms had to be inside the costume so i added even more width to that costume. Plus i had to make an opening so my arms could come out whenever I want. I cut, taped,and glued the cardboard body together with supports for the corners made from very thick cardboard material. As with the head, my girlfriend outlined, drawn and painted the body.

For the legs, we took the cement tube and cut it in half. We then glued it to the body. Afterward we measured the height of our legs from our knees to our ankles. The reason we measured it from our knees to our ankles and not our foot is because we wanted the costume off the ground and to be supported by our shoulders. This makes it easier to walk with the costume on. Our last touch to the costumes were the lego hands of my girlfriend's costume made out of cardboard. She wanted to have full use of her hands so we made a cutout in the middle to put her hands through.

We wore our costumes only to one party and everybody loved us. It was a good thing my friends were with us since they directed us through the crowd. We must have taken a million pictures that night. People who knew about The Walking Dead series instantly recognized our costumes. However for those who are not familiar with the series, they were asking why the zombie didn't have any arms and was chained up or why my girlfriend's costume was carrying a sword. I told them the background of the character and zombie. Hopefully they turn into fans of The Walking Dead too!

My girlfriend and I had a great time making these costumes and love the feeling of all the smiling faces we see while wearing the costumes. Even though we could only make it out to one party, we will walk around the neighborhood during Halloween so all the kids could see it too. Hopefully they will enjoy it and strive to make a DIY costume next Halloween also!