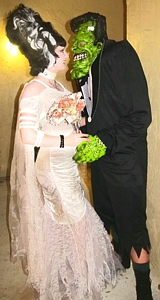 Fictional characters costumes are often the first thing that come to mind when you start planning for Halloween. Frankenstein's Monster, zombies and winged creatures of death and destruction are always popular and of course, they're not something you'd find in real life.

For some people the only good costume is the scariest costume they can put together, something with nightmarish qualities, like a blood-sucking vampire or a this spine-tingling Soul Walker. Trust me when I tell you these is one of the freakiest costumes I've ever seen. It's handmade by Eric who wanted to create a costume that looked like something nightmares are made of.

And this Reptileman costume by Austin, who happens to be one of our country's brave servicemen, looks like something a professional FX guy would create. But after taking a closer look at the pictures and reading Austin's detail description it's easy to see this is strictly homemade yet one of the most impressive fictional character costumes ever.

Some people like to use the opportunity to become quite the opposite, like a magical mermaid or a pink flower princess fairy godmother. Now that's definitely a fictional character Halloween costume! Gnomes, fairies and elves abound on Halloween night and we've actually spotted a Unicorn or two.

If you're having a hard time coming up with your own fictional character costume, try looking at some of your favorite television shows or movies. And not necessarily current fare, either. Think back to your childhood and see if you remember watching H.R. Puffnstuff on television, or maybe your remember reading Dr. Seuss books – you'll find some funny AND some creepy fictional character costume ideas there, that's for sure!

Probably more than half of the Halloween costumes you see are based on fictional characters. And that's what makes it so fun! You can let your imagination run wild and turn yourself into the stuff of nightmares. A simple flannel shirt and some fake fur, a set of fangs and a heavy dose of fur turn an innocent child into a raging Werewolf.

Halloween is the one time of year when you can let your imagination run wild and you'll never be too scary or too cute or too funny. So pick your favorite comic book hero or your favorite horror movie villain or your favorite cartoon character and start creating that homemade costume! Halloween will be here before you know it and you'll want to enter our Halloween Costume Contest.

We'd love to see your creative home made costumes in our gallery! Submit your Halloween costume photo, and enter our costume contest this year!