The child in the Costume is, in fact, "Lily".
Costume made by Lily's Mom, Angela Wilder. 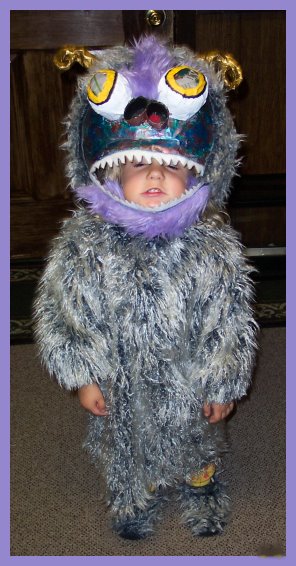 I used things around the house:

First I cut up the fur coat to fit my 3 yr old. Used the starch, newspaper, and balloon and paper mache' the balloons (3 layers of paper) with drying in between. Then I cut the balloons to fit her head and cut out and taped smaller balloons for eyes. Hot glued the leftover fur on the head. Took the wire hangers cut them in half and wrapped new paper around the wire and taped it then bent it in the shape. I then paper mache' the horn, when that is dried I taped and glued the horn on the head and paper mache' over that. Then when everything is dried you paint it. The head did not fit that well so I filled it with a think sponge that would be in a couch cushion. 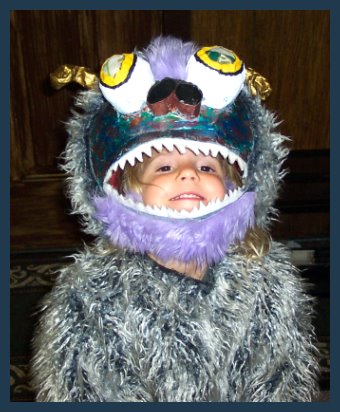 Angela Wilder and her family live in St.Louis, MO. Angela would love to have a career in creating Costumes... She just needs a nudge in the right direction Ü
Anyone looking for a passionate costume designer?

If you don't have the time or the inclination to MAKE a costume this year. If you've thought about it, but your heart, for whatever reason, JUST isn't in it... You can probably purchase a costume of the type you were planning to make... and maybe even for about the same as you might spend on the materials to MAKE a costume. On the other hand, you may look around and spot a Costume that changes your Costume plans completely.