Pilot in the Airplane
by Bob

You will see several of my friend Bob's Costume Creations in this, "Homemade Costumes" section. Bob tells me that he simply gets an idea in his head of what he wants and then he just BEGINS... "winging" it all the way! As a closet-artist myself, I can totally relate to the way that Bob "creates". I think that Bob is an Artist in his own right..and I know that he developes other projects because it is just something he enjoys doing. I can see by the photos of Bobs Costumes that he is definately a superb "Sculptor in Cardboard" and should be proud of his work. 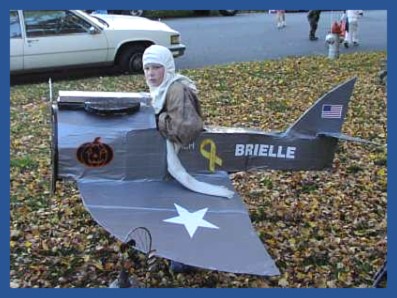 The picture below shows the back view of the Plane: 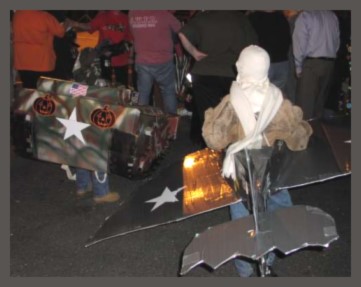 Although I don't have any "written directions" or "diagrams" for these outfits by Bob, I figured that someone may be inspired by a photo...and could even use them as a "source" for beginning your OWN craft or vehicle that would make a great costume for you or one of your kids. An "older" child may be able to do one of these types of projects with just a little help as sometimes young people are a bit more DARING than we are and aren't so hung up on thinking about "failure" as us "older" folks may be. :-) For "crafty" people... persons having experience with Cutting, Taping, Glueing, Painting, etc... it may not be a hard task to simply eye-ball these pictures and know exactly what needs doing. For others, it may take more concentration and trial-and-error. HOWEVER! If I've learned one thing in this lifetime, it is this: If a project doesn't turn out exactly like somebody elses...it's not necessarily a BAD thing. It's the "differences" that make a thing YOUR OWN...so...Don't sweat the small stuff. :-)

View other Homemade Costumes made of Cardboard:

The making of one of these "Cardboard Sculpted" Costumes can be quite a task. I have not, as yet, seen a place to PURCHASE costumes of this type and if there were something like this out there to buy I am certain it would be quite costy.
Then there is the fact that some of these types of Costumes are "Vehicles" of some sort which the driver may wish to "park" and GET OUT OF at some point. You may wish to come up with your own, homemade "uniform" to go with the Vehicle to complete the Costume...which I am sure many Costume makers can do without much problem.

If you, however, find yourself short on time and/or energy (not surprising after all of the work with cardboard and tape Ü) You might just want to visit one of my favorite On Line Costume Stores and see what is available. In some cases the purchase of a Costume... or a "partial" costume, as would be the case here...may save you MUCH on time and wear and tear. As you may notice, the cost of Materials to make a costume...may be more than what you could/would pay for a costume already made. Just a thought. Ü