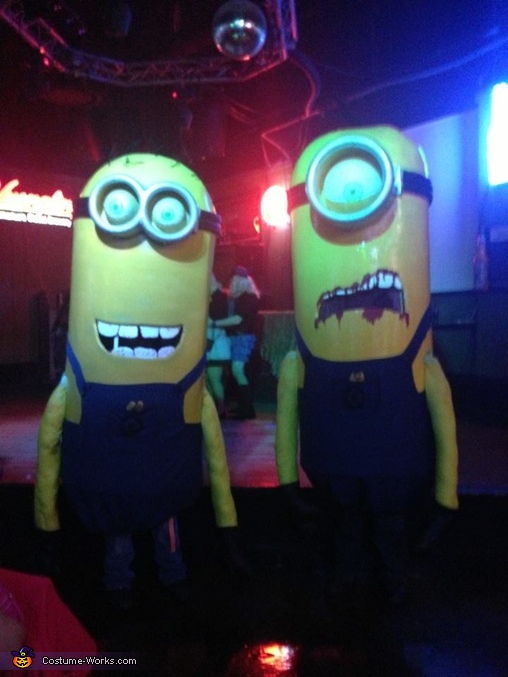 Together in the club! Just won 1st place!

A word from Matt, the 'Zombie Minions' costume creator:

Every year, my brother and I build our costumes from nearly scratch. This year we thought long and hard on what to make. My kids are absolutely in love with the minions from Despicable Me, and my 4 year old wanted me to be a minion this year. So with the Halloween spirit, we decided to make Zombie Minions! (Because who doesn't love zombies?) Every year we try to out-do ourselves and be bigger and better! This year we took that very literally with 9.5' and 10' tall minions! Sure we couldn't walk through doorways very easily, but that didn't stop us! We made two giant minions, and I wore the taller one, and my brother Steve wore the shorter one, because he's already naturally shorter than me, and we wanted to show the height difference between the minions.

How we made them: FOAM. We began by making a frame out of PVC pipe, by heating and bending it into a circle, and putting it together to the height we needed. We created a dome on the top with PVC and lined it with a wire mesh. We then took foam insulation sheets that we had taped in a roll for several days to get them to curve; and wrapped them around the frames. We attached the foam to the frames with a spray foam meant to fill gaps in doors/windows, etc.. We then cut strips of foam and adhered them to the top dome, using the spray foam to hold it all together. When the spray foam had dried, we shaved the excess away, and used dry-wall mud and Bondo to smooth everything out. We purchased half foam balls to adhere to the outside for eyes, and created the goggles and straps out of some left over sheet foam. After attaching all of this to the main body and cutting out a mouth, and attaching the teeth we made out of the piece we cut out of the mouth, we applied a coat of white primer paint to the entire surface. We then used a product called StyroSpray to coat the entire body. We put on several coats, and this product gave us a durability, smoothness, and an extra shine to the costume. we bought some black fake leather and cut pieces to attach around the goggle strap to make it look real. We painted the goggle silver, then masked it off and painted everything yellow, many times over, until it had a luster. Then we sprayed the eyes with a glow in the dark spray, so they would glow under black light and in the dark. We then purchased about 15 yards of denim and began measuring, cutting, and sewing the overalls to fit the mammoth minions. We made a stencil of the "Gru" symbol and painted it onto the pockets of the overalls. We purchased a heavy duty yellow nylon and sewed the arms with long reaching contraptions in each so that they would be usable. We used the same black fake leather to sew the hands onto the arms. Now that everything looked great...how could we wear them? It'd be too hard to carry them, so we got a couple of hiking backpacks with metal frames. We installed bars inside to mount the backpacks to, and wore the backpacks to secure the costume to our persons. And finally, the 9.5' and 10' tall minions were born! We each had a megaphone inside and phones loaded with minion sounds to make them more authentic as well! And boy, was that a hit when the minions sang "Ba-Ba-Ba-Banana"! Overall cost, however, was a bit more than we had imagined, totaling over $575 between the two costumes, but they came out fantastic and everybody loved them! We won 1st place in 3 out of the 4 major contests in the Akron, OH area this year, losing once to a Miley Cyrus and Robin Thicke (lame). We're very proud of these costumes this year, and look forward to building something even bigger and better next year!