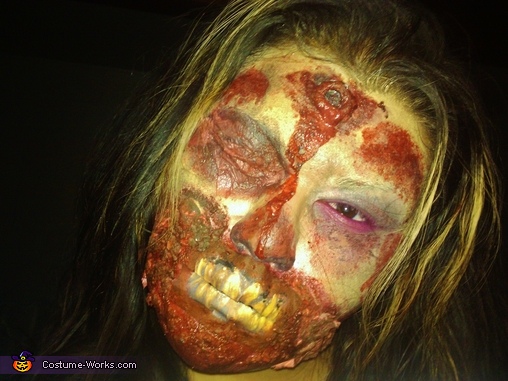 A word from Lucero, the 'Zombie' costume creator:

This costume was done for myself, and the idea came to me from watching all this scary zombie movies during the Halloween season I thought hmm I would like to try a look like that! So being a little low on money this October I headed to my pantry grabbed some flour and oatmeal, then to the bathroom and collected a couple of tissues,petroleum jelly and one of those old Halloween makeup that have four colors(red,black,white,blue) pallet from last year, and some fake blood. After that I printed off a set of paper teeth on plain paper, putting it together I mixed some petroleum jelly,flour, oatmeal, red face paint and a small bit of black face paint with a touch of water. I prepared my face with some of the white face paint mixed with a bit of yellow and blue to make a slight green tint, rubbed that all over my face except the mouth/lip area. Then I spread a thin layer of eye lash glue around my mouth and added some crinkled shredded paper for it too stick, after that I build up the color with some fake blood and added details of brown/black scabbing with eyeshadow, then I cut out the paper teeth leaving about half inch border (or how ever big/small you need it) and glued it onto my mouth using eyelash glue, and built up around it with the red oatmeal mix, and did the same to the bottom mouth and other side of the cheek. Then I colored my right eye black and added a crinkled piece of tissue paper to make it look as though it was missing, added some blood and eyeshadow to make it look a bit more realistic. After that I rolled a bit of tissue in fake blood and glued it to my forehead to make the bullet wound, added some eyeshadow on and around it, along with some fake blood dripping. In the end I added some blobs of fake blood around my face, and finished with red eyeliner. Well that's my homemade look this didn't cost me anything seeing as I had ever item I used around the house but if you were to create this look I'm sure it would be fairly inexpensive! :)